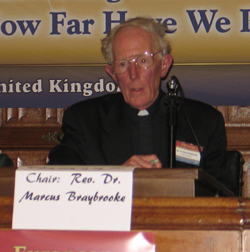 Interfaith Harmony week is so important. Sadly so often in the past religious exclusivism and contempt for the other has been a contributory factor in the genocidal killings that scar human history. It is time for people  of faith to make deep apology to members of other faiths whom they have hurt and offended as Pope John Paul II did at the Western Wall in Jerusalem It is also vital that as people of faith we work together for a more just and peaceful world. Some people have expressed surprise that we should link a belated observance of Holocaust Memorial day and World Interfaith Harmony Week. At first, I felt the same, but increasingly I have seen how appropriate it is. Rightly in a time of silence we shall remember the six million Jews and many others who died in the Holocaust and many more who have been slaughtered in terrible genocides - especially we pray for comfort to those whose family members died, and those who were injured.

But perhaps the least we can do in memory of the voluntary and involuntary sacrifice of so many people is to pray and act to ensure that such horrors are never repeated.

This is why Interfaith Harmony week is so important. Sadly so often in the past religious exclusivism and contempt for the other has been a contributory factor in the genocidal killings that scar human history. It is time for people  of faith to make deep apology to members of other faiths whom they have hurt and offended as Pope John Paul II did at the Western Wall in Jerusalem It is also vital that as people of faith we work together for a more just and peaceful world

I will never forget on my first visit to Jerusalem in 1958 going into the Chamber of the Holocaust on Mount Zion -long before Yad Vashem was built. The cruelty and inhumanity was unbelievable - and although I have read so much since then about the Holocaust and other terrible genocides, I still find it unbelievable - and, unless our sensibilities have been numbed by the many horrors reported on television - we should be shocked again and again that such cruelty is possible.

So the question for us this evening is how without forgetting do we ensure that the future is not embittered by the past? Edwin Muir, in one of his poems, warns that if we fail to face the evils of the past, "long since rusted knives" stab us from behind and "revengeful dust rises up to haunt us" Muir goes on to to say that history plagues us like a relentless wheel and asks who can "set us a new mark" or "circumvent history" and stop the relentless turning of the wheel.

I believe forgiveness and reconciliation which all religions teach is the only way we can "circumvent history. But what do we mean by 'forgiveness This evening, as some of you may know, is one in a series of meetings in which we have shared personal stories of forgiveness. We have looked at the various stages by which as individuals we can let go our bitterness and be reconciled with the person that hurt us.

Tonight we shall think more about collective expressions of repentance – as for example Pope John Paul II’s prayer for forgiveness at the Western Wall in Jerusalem – but also about how nations can heal the wounds of conflict. lessons learned from the several truth and reconciliation  issues raised

Since 1973, more than 20 ‘truth commissions’ have been established. Some by the United Nations, some by non-governmental organizations (NGOs) and the great majority by governments. Who sets up the commission, of course, has a bearing on its approach. Most of the governmental commissions were set up by ‘transitional governments’ of often very fragile democracies as they tried to move on from the civil and human rights abuses of previous regimes. They thus had a political purpose.

For many people the proper response to the perpetrators of abuse, violence and ethnic cleansing must be criminal proceedings – for example at the International Court of Justice.

But it may take time to catch the perpetrators. Is an amnesty a price worth paying to get rid of a ruthless dictator - as in Chile with Augusto Pinochet?  What about those who, in the words of Liberia’s Truth and Reconciliation Process, ‘committed lesser crimes’? Do you end up prosecuting a quarter of the population? In Liberia they were given a complete pardon, whereas leading members of the regime were prosecuted.

The emphasis of Truth and Reconciliation Commissions is on healing and helping a country to move forward. But is this at the expense of justice for the victims?

In South Africa, the Truth and Reconciliation Commission, which Archbishop Tutu headed, offered a conditional amnesty, if a person made a full and public confession of criminal activity. Tutu has insisted that ‘public exposure and humiliation’ was a big price for the perpetrator to pay.[i][i]  But others more cynically have said it was a price worth paying.

Should discovering the truth be linked to the granting of amnesty? In Guatemala the Catholic Church established a ‘Truth and Memory Project,’ chaired by Bishop Juan Gerardi, who was brutally murdered two days after presenting the report. The Guatemala Truth and Memory Project’ had no power to pardon, but for many whose loved ones had been abducted and thrown into unmarked graves, their greatest need was to know what happened and to have the injustice acknowledged. The recent Citizen’s Pact in Mexico, had as its first demand, ‘Resolution of the assassinations and disappearances and the naming of the victims.’ In the words of Javier Sicilia, whose innocent son with five friends was murdered by drug dealers, ‘The pact demands that the victims of violence be named.’   But it also demands an end to impunity.

In Sierra Leone, however, there was little popular support for a Truth and Reconciliation Commission. Partly this was because of the fear of reprisals and partly because people preferred local strategies of recovery and reintegration. There was also a reluctance to revive memories of the atrocities. As Rosalind Shaw has said, ‘Truth Commissions do not constitute therapy.’

These and other vital issues will be illuminated by our speakers with reference to specific situations - but first it is appropriate that we have a time of silence to remember those who died in the Holocaust - six million Jews and many other innocent persons - the tragic victims of too many genocides - and those whose even now mourn loved ones in the struggle for civil and human rights in many parts of the world today.