An enduring foundation for understanding the culture and climate of peace
May 21st 2007, Moses Committee Room, House of Lords, London 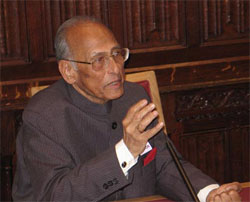 I ask myself in this Moses Room, ‘What would Moses have to say to us?’ Maybe he would add one commandment: ‘Thou shalt endeavour and strive for peace ceaselessly’. Today religion is often seen as a potent but negative force. As Lord Parekh said, we must not just look for commonalities between religions but for ways in which we can aid the process of co-existing well. In the declaration of UNESCO it states that ‘War begins in the minds of men’ – I say that peace begins in the minds of men, women and children. The Universal Peace Federation’s work is all about this peace and it is my privilege to introduce this work to you.

UPF is emphasizing that peace is too important to be left to diplomats and soldiers alone. There are other constituencies of peace which deal with our common future and human equality. UPF is the forum to address these issues – weare many people, but one world, one cosmos.
If we do not hang together, as religions, we will hang separately! The mission of religion is to reach the soul and heart of humanity. UPF promotes the culture of heart in the garden of diversity and is for intervention on a hundred fronts where humanity needs help and succour. Peace will not come unless civil society is at the forefront and pushing interfaith dialogue. It will not come through the establishment. Inter-religious work speaks of love of peace and the peace of shared love. There is so much we can do together and that we destroy in our separateness.
(Dr. L. M. Singhvi is the former Indian High Commissioner to the UK and President of UPF India and member of the UPF Global Presiding Council) 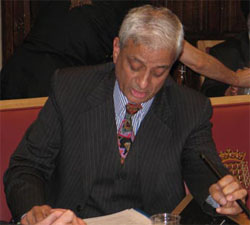 Lord Khaled Hameed of Hampstead
It is my great honour to receive this award – I am overwhelmed. There are in fact many people of distinction and nobility working for the brotherhood of man beyond race religion and nation.

Ambassador K. V. Rajan
It’s not good for religion to be kept at arms length by the United Nations and national governments when religion can contribute universally recognized values such as self-sacrifice and service to others to the resolution of conflicts. (Ambassador Rajan was the Indian Deputy High Cimmissioner in the UK and former Indian Ambassador to Ambassador K. V. Rajan Nepal.) 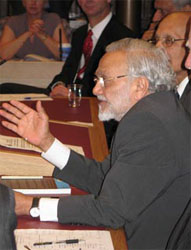 (Centennial Professor for the Study of Global Governance at the London School of Economics)
What can we do about the rise of aggressive, militant religion and why is it happening? We cannot ignore it or it will continue unabated. Do we declare a ‘war on terrorism’? No, this is misguided – the more you oppress the more energy you give. Every act of injustice intensifies the sense of identity among the oppressed. (Religion) sensitizes us to our responsibilities and can reach to areas that bureaucratic governments cannot reach. We should develop institutional forms of collaboration between the state and religion toward making a good society.
Once religion enters the public space to speak it also has to accept certain norms around respect for others and working together. Interfaith dialogue should be encouraged as a process by which I open myself to learn while at the same time allowing others to learn. Let us look for commonalities between us as religious people in the practical concerns of life and society. If God is truly infinite no finite religion can capture Him! 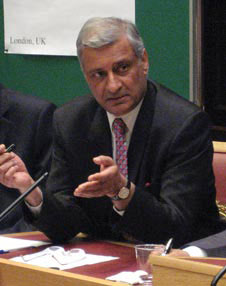 Address by H.E. Kamalesh Sharma
High Commissioner of India to the UK
The globalization of technology, economy and trade has been accompanied with the globalization of disease, crime and narcotics.Only wisdom is not globalized! Humanity can be likened to a person dying of thirst and digging for water, but finding only gold.
As Gandhi said – ‘We cannot transform anything unless we first transform ourselves’. We do not need a melting pot to make them (people) the same rather it is a salad bowl of delicious variety which can nourish us all.

Dr Thomas Walsh
Secretary General of UPF International Religion needs to mature. The front line of all religions is the call to look to self, to humility, to consider my contribution to the barriers to peace. Our Founder, Dr Moon, spoke at the United Nations’ Building in New York of how religion must be at the table to solve world problems. The final outcome should be the integration of religious sensibility with the intellectual and the technical. A harmonious family provides the template for a harmonious society. We must strengthen the family as a vital means to peace. 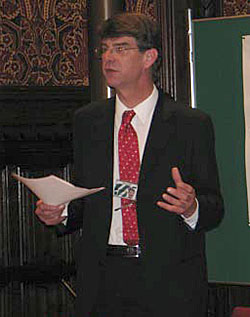 Rob Marris MP
I learnt from today’s dialogue that as a politician I need to be more relaxed about religion.
As a politician I do not want to remove religion because it is precious to me and many of my constituents. It is particularly hard for the proselytizing religions, Christianity and Islam, to be more relaxed about other religions. Inter-religious relations are not an end, they are work in progress. It is like riding a bike – if you stop you fall off!

Inter-religious Council at the United Nations
One central objective of the Universal Peace Federation, is to persuade the United Nations and its member states to establish an Inter-religious Council at the UN. Such a council would allow the voice of wisdom and principle, to be heard, so that it might contribute to the effort to solve our world’s most critical problems.

The Philippines Initiative
The initiative for interfaith dialogue proposed by the Philippines in the United Nations has bourne fruit in Resolution 61/221 adopted by consensus in the General Assembly in December 2006, entitled, ‘Promotion of Inter-religious and Intercultural dialogue, Understanding and Cooperation for Peace’.
It was sponsored by Pakistan and the Philippines and co-sponsored by over 50 other nations. The resolution also mandated a high level unit in the UN Secretariat to deal with interfaith and intercultural matters. 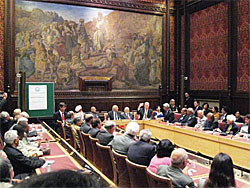 Goa Declaration, India on 23 April 2007.
Prior to the House of Lords event, Hon. Dr. L. M. Singhvi and Ambassador K.V. Rajan, supported by the Governor of Goa, Shri S.C. Jamir, inspired the declaration that called for the establishment of a World Spiritual Council at the United Nations which would strengthen the capacity of the UN to prevent and resolve conflicts.

What is the Universal Peace Federation?
Founded by the Dr. Sun Myung Moon, it was given a broad mission related to global governance, human development and peace building. As the UPF established chapters around the world, its mission has expanded to character education, marriage and family, HIV/AIDS prevention, conflict resolution, interreligious dialogue, and leadership training. The UPF has applied its innovative vision and methods to the search for solutions to our world’s problems. The UPF Ambassador for Peace Award is presented to individuals whose lives exemplify the ideal of living for the sake of others, and who dedicate themselves to promoting universal moral values, strong family life, inter-religious cooperation, international harmony, renewal of the United Nations, and the establishment of a global culture of peace.