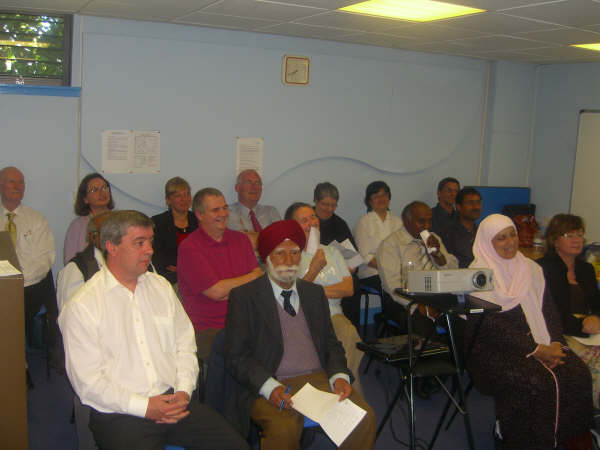 17 people attended the monthly UPF inspired interfaith meeting in Glasgow at the Pollowshield community hall; there were 4 new-comers.
The first speaker, Rev Paul Jupp kicked off with some self introduction, explaining that he is trying to encourage interfaith activities, and also working with the council. In his talk he said, "things can be changed; to change people's bad behaviour one needs to give people a vision to look forward to”.

The second speaker, Carrie Varjavandi from the Bahai faith, started by explaining that the founder Bahá'u'lláh stood for ‘many religions believing in one God’.  She said all religions contain truth, so we shouldn't have any prejudice. She said humans are not born bad, and each one is a gift and inherits their qualities from their parents. She explained that there are several issues which made us different, for example culture and education which influence us to be bad or good.

Lastly Paul Currie, representing the UPF, likened God to a parent who has lost His children, and invited everyone to imagine what kind of heart such a parent has, trying to find out how it happened, and what to do.

This was followed by interesting discussion on that point, and the meeting ended with a peace prayer for the world.