Culture as a Basic Element for Sustainable Development and Human Rights 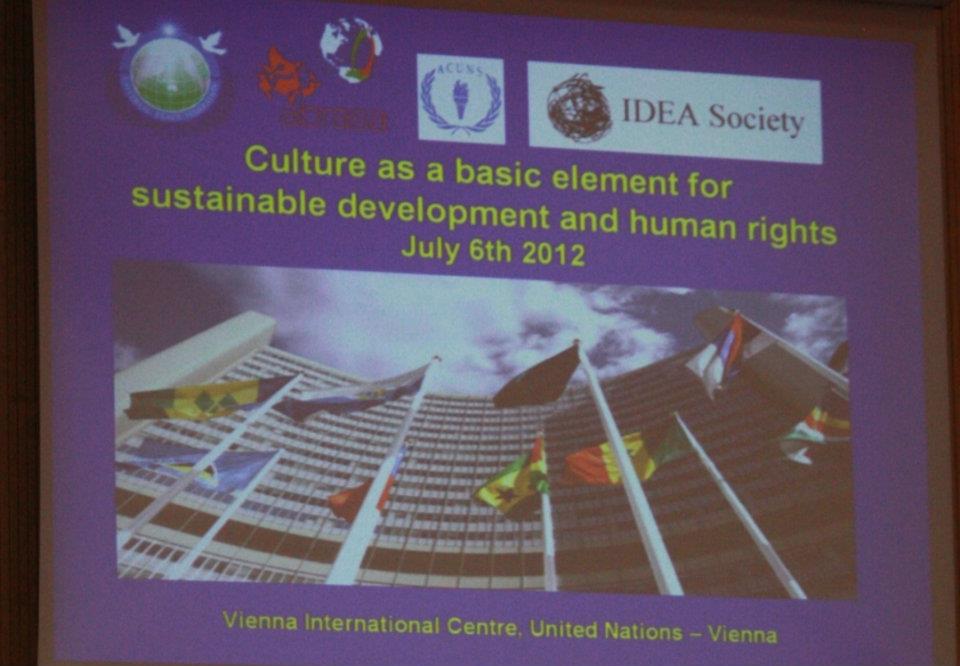 Vienna, Austria - While a heat wave has been hitting Vienna for several days and most people were rushing towards the next swimming pool, 120 people gathered on July 6th 2012 in the United Nations Vienna International Centre in order to participate in the conference “Culture as a Basic Element for Sustainable Development and Human Rights”.

It was co hosted by UPF Austria, the IDEA Society, an organization for International Enhancement of Art, and ACUNS Vienna, the Academic Council on the United Nations System. ABRASA, an Austro-Brazilian NGO for the promotion of Intercultural Education and Social Integration was the organizing force behind the conference. It brought speakers from different cities of Brazil to the conference.

The event was the result of an ongoing cooperation of the Universal Peace Federation with ABRASA. ABRASA has been organizing since several years a project "Austria-Brazil em Movimento" that was now rearranged to a 4-days festival "CarnaViena" which wants to bring the Afro-Brazilian culture of Bahia in Brazil to Vienna, the city of classical music. Besides the conference a meeting of businessmen involved in tourism and creative economy and a Bahian carnival-like street parade were part of the event. (Fotos on Facebook)

The conference was opened by Peter Haider, president of UPF-Austria. As he himself had lived for one year in Brazil, he shared some of his personal experiences and explained the idea of "Points of Culture" behind organizations like ABRASA, which was explained in an article by the London newspaper TheGuardian:

"Twenty years ago, it seemed as if Brazil couldn't stop dreaming about its future. Now the future has arrived; Brazil is an economic and political world leader with a seat at the globe's most influential table. Yet the country still faces the fundamental renegotiations of power – between rich and poor, women and men, black and white, indigenous and immigrant, city and rural communities. Recognising that without a new and radical approach Brazil will never achieve its promise for a just society, engaged artists in the favelas of Rio de Janeiro, Sao Paulo, Salvador and in rural areas across the country are pioneering new approaches to giving communities a real voice. But their work doesn't spring randomly from unconnected initiatives – it's part of a strategic plan to create an entire network of socially committed cultural projects.

In 2003, the Brazilian government created an initiative called Points of Culture: thousands of community and arts projects of all sizes and types that would work to strengthen people's involvement in the life of their neighbourhoods and the larger society. The idea came from the legendary musician Gilberto Gil who had agreed to become culture minister for a five-year period under President Lula. The very act of having artists in the centre of government sent a signal of serious intent. Throughout his ministry poets, playwrights and philosophers worked in the executive, bringing a new language of aspiration and inventiveness to that of Government.'   (Fotos on Facebook)

The first speaker was Dr. Leo Gabriel, a Social Anthropologist and Human Rights Activist, who spent several years in Central America as a journalist and published several books on developments in Latin America. He showed a short movie, which he had produced earlier for the Austrian national TV, about an alternative banking system in Bahia, one region of Brazil, the “Banca Palmas”, which helps people fight poverty. It was founded 10 years ago and has spread since then. It provides the people of a certain region with its own money which can be used only locally. Dr. Gabriel commented that economy and culture are connected and that there have to be many different local economical systems in order to develop a region.

Then Dr. Stefan Stoev commented in his statement to the conference that cultural exchange is an important foundation for all political relationships between nations. As an economist, philologist and philanthropist he is also the founder and president of the IDEA Society, an NGO that deals with intercultural exchange by linking artists from different countries and cultures. His speech was followed by a Brazilian artist, Mrs. Marlene Rodrigues, who explained the purpose of an Art Exhibition with works by Brazilian artists in Vienna under the title: “Before the apocalypse”. Each of the six artists presents a solution for the “problem” in an artistic way.

Mrs. Queila Rosa Panstingl, the president of ABRASA, then explained the purpose and the activities of her NGO. As an Afro-Brazilian lady who is a professional dancer and who lives in Vienna with her Austrian husband and four children, she has lots of experiences of what it means to adapt to a foreign culture. Her main purpose is to support Brazilians in Austria, to help them find work, learn the language or solve their day-to-day problems. At the same time ABRASA is a centre for Brazilian culture in Vienna which supports artists from Brazil and also from other countries. Another important field of activity of her NGO is to connect and support different groups of performing artists. Mrs. Queila Rosa is also making connections between culture and economy, helping the artists to survive by working as artists and she went on to speak on “creative economy”. Fortunately the city council of Vienna is becoming supportive of her endeavours.

Dr. Emilton Rosa was the final speaker of the first panel. He is the director of the “Instituto Alianca” in Brazil. This Educational Institute is widespread in Brazil. It has the purpose to support adults in getting a better education. Dr. Rosa was highly appreciative of Mrs. Queila Rosa and promised to promote her activities in Brazil and find more support for it.

After a 30 minutes break the program continued for the second session with another short movie: “Treze Tílias” – “The three Lime trees”. This is the name of an Austro-Tyrolean town in the Brazilian state of Santa Catharina. The movie showed the traditions which the Austrian emigrants have been keeping since 60 years. After the movie Mrs. Dirlei Barbieri Rofner, Secretaria Municipal de Turismo of Treze Tílias, whose ancestors emigrated in 1933, told us more details about her hometown and her experience coming back to Austria and all the complicate circumstances she encountered in the country of her ancestors.

Then Mag. Peko Baxant, representing the Vienna city council, congratulated Mrs. Queila Rosa for having established her NGO with great persistency and for all her activities, remarking that she should never gives up to bother politicians and force them to view culture from another viewpoint: economy is a result of culture, as can be seen in the production of almost every item like a simple pencil whose production story he used as an example.

The next speaker was Mr. Erivaldo Cruz from Salvador de Bahia. He reminded us of the history that an Austrian Habsburg princess, Maria Leopoldina, married Dom Pedro I , founder and first ruler of the Empire of Brazil and became the mother of Dom Pedro II, its second and last ruler. She fought for Brazil’s independence, which created a natural connection between our two countries. Mr. Cruz emphasized that Austrians are always welcome in Brazil with open arms, and that he hopes that this will become the tradition between all countries and cultures around the world. The barriers between the 1st and the 3rd world have to be torn down.

Ing. Lothar Ernest Wolf, Honorary Consul for Brazil from the westernmost part of Austria, Vorarlberg, told us about his experiences in Brazil: He went there to help develop a textile company, but had to realize soon that it was him who could learn so much from the people there: the concern for each other, the care and warm-heartedness. He married a Brazilian lady and moved back to Austria later. His determination was to bring the practise of such a heart back to Austria.

To conclude the program Peter Haider spoke about the goals of UPF: "In this place we have to remember the purpose of the UN and do our utmost to contribute for the realization of a world of lasting peace. That’s the driving force behind the activities of UPF". One expression of our determination to secure this determination for peace is appointing Ambassadors for Peace. Peter Haider, together with Queila Rosa, who had received the certificate last year, presented this award to five persons: Dr. Emilton Rosa, Mr. Erivaldo Cruz, Mrs. Dirlei Barbieri Rofner, Ing. Lothar Ernest Wolf and Mrs. Lucia Neves representing Bloko Afro Bankoma. Her group led the Bahian carnival-like street parade the following day trough the busiest shopping street of Vienna, which was blocked for this demonstration of Afro-Brazilian culture for several hours with more than 1000 people watching.

Many photos were made to keep the memory of this event alive. German language was translated into Portuguese, both no UN languages and only then into English. But the perfectly installed translation system of the UN building did not protest against it. When everyone left the building it was raining and the heat-wave had finally cooled a little bit down.   (Fotos on Facebook)