An Evening of Urdu Poetry 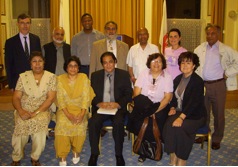 This evening the Universal Peace Federation in London held a recital of Urdu poetry by Ahmed Omer Shareef, a celebrated poet from Pakistan who is currently visiting the United Kingdom. He was introduced by an Ambassador for Peace, Cllr. Faizullah Khan who then acted as translator for the evening. Ahmed Shareef, has been in the literary world for more than half a century and also writes drama, for radio and TV.

His poetry is all about peace and love and his recent book of poems, published in Pakistan in the Urdu language, was sponsored by Writers Guild of Pakistan. He is currently travelling around the world to spread his message of Peace through his poems.
During the evening Mr Brig-Mohan Gupta, as a Hindu, expressed how he could feel deeply about such Islamic-based poetry as it was poetry that brought them together in their thought.
Despite the excellent translation of Cllr. Khan, Ahmed Shareef was particularly concerned that everyone understood his poetry. Mr. Alan Rainer, who also read some of his own poetry at the event, said that even though it was in a foreign language he could sense the meaning because of the rhythm and spirit of the language.