Youth Universal Peace Federation (UPF) members visited Regents Park Mosque today to 'Walk Hand in Hand and Shoulder to Shoulder to Heal our Communities'. Supported by Sheikh Dr Hojjat Ramzy, the Muslim Council of Britain Education Committee Chairman, the group of young and old UPF activists from several different faiths, were introduced to Sheikh Imam Khalifa, the Imam of the Regents Park Mosque. He reflected on the current situation of the Muslim community. He shared that humanity all have the same heart and spirit given to them by the creator but we developed differently due to Allah's wisdom. We should not harm another community because of those differences. (Photo Link)

This is a great pleasure for our Nigerian delegation to be speaking in the British Parliament centering on the words of freedom. This year’s celebration of Africa Day is indeed a rare opportunity for myself and my Christian brother, Rev. Kato. We have been in government for about six years now. My Governor always says, "if you think peace is not important, try war." Prof. Lord Bhikhu Parekh, Professor of Political Philosophy at the University of Westminster stated that Human Rights must include socio-economic rights. He expressed his concern that “rights are being chipped away” by budget cuts, “the war on immigration” and the practice of “stop and search” by British police.

1) Human Rights in Europe are part of Liberal Jurisprudence

We do not have minority rights unlike nations like India or in parts of the Middle East or in South Africa or Canada. Rights here are fundamentally individual rights, enjoyed by minorities as individuals not as a collectivity.

2) Rights are not just civil and political. They are also social and economic rights and they extend to welfare and social benefit and lots of other things. 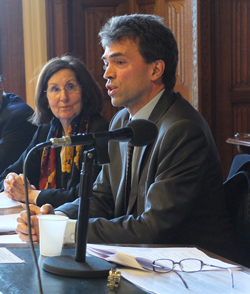 Rt. Hon. Tom Brake MP, Liberal Democrat spokesman for Home Affairs issues, took a Human Rights angle on the recent riots in the United Kingdom. He expressed his concern that Human Rights are experiencing a backlash in UK at the moment. They had not restricted the police in dealing with the looting. “The police does not want or need new weapons, curfew powers, or the power to shut down social networks”, he stated and expressed his concern about misleading language in the media, when it comes to “so-called Human Rights.”