Youth Universal Peace Federation (UPF) members visited Regents Park Mosque today to 'Walk Hand in Hand and Shoulder to Shoulder to Heal our Communities'. Supported by Sheikh Dr Hojjat Ramzy, the Muslim Council of Britain Education Committee Chairman, the group of young and old UPF activists from several different faiths, were introduced to Sheikh Imam Khalifa, the Imam of the Regents Park Mosque. He reflected on the current situation of the Muslim community. He shared that humanity all have the same heart and spirit given to them by the creator but we developed differently due to Allah's wisdom. We should not harm another community because of those differences. (Photo Link) He was grateful for the visit saying that this time of challenges will pass. He added that the Muslim community has a good situation generally in UK. Another worshipper after reading the banner and understanding the nature of the UPF visit, extended his blessing to all who had come to visit at this testing time. Robin Marsh expressed that UPF believes that humanity is one family under a loving God and that is why we had visited today. Sheikh Ramzy shared that the Mosque was a 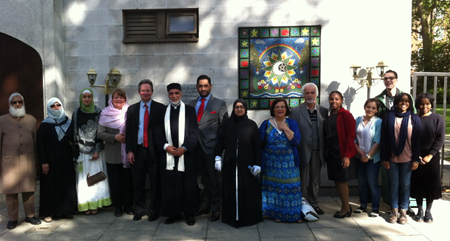 place that was open to all who wanted to pray to God. He said he was proud to be an Ambassador for Peace of the Universal Peace Federation that is a great organisation working for peace in the world. Attending the late afternoon prayers and meeting some of the worshippers, the group was later given a tour of the Mosque which, being built in 1974, is the third oldest in the UK.

The UPF -UK, with support from its leading Ambassadors for Peace,  has released a statement from the day after the murder in Woolwich.

'The murder of a soldier in Woolwich was a tragic event last night. Our prayers are with his 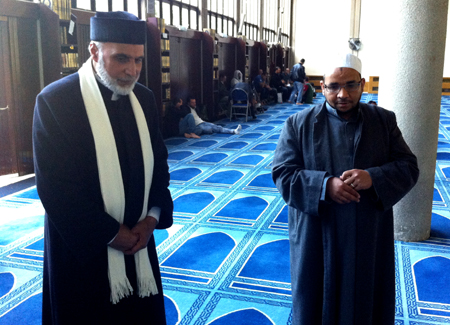 family who must be really suffering. It is also sad to see a backlash from small extremist groups against the Muslim Community. Now is the time for all communities in UK to appreciate the genuine Islamic contribution to UK. The Muslim community should be supported and valued as a vital part of the UK. It is through the democratic process, that the role of the UK soldiers who represent us all, is decided. Our strength and harmony is through the inclusion of all communities in the social and political fabric of the nation. That is a daily responsibility for all of us that now has added importance. The Universal Peace Federation, along with many other groups, promotes interfaith activity to facilitate mutual understanding and enhance this fabric.'