'Good morning distinguished delegates, it is a pleasure to welcome you to this European Leadership Conference on Multiculturalism at the 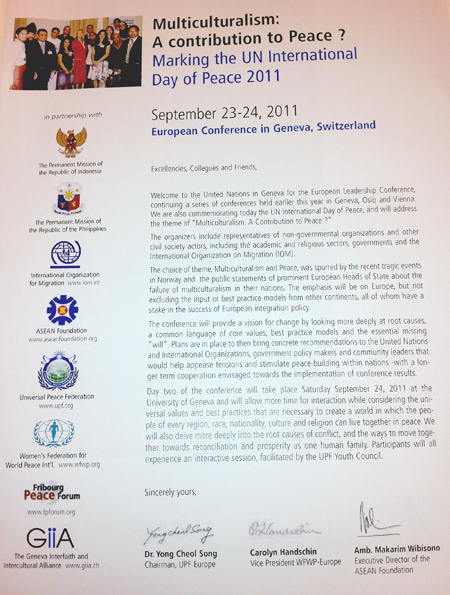 Multiculturalism has for several decades provided the primary strategy relied upon by liberal Western society to promote mutual respect between people from different cultures, who find themselves living side by side in our increasingly globalised urban societies.  However, several European leaders have in the last months referred to the failure of multiculturalism. UK Prime Minister David Cameron stated in Munich last February:  ‘We have encouraged different cultures to live separate lives …..We have failed to provide a vision of society to which they feel they want to belong.’ In response the Muslim Council of Britain expressed that their community are still being treated "as part of the problem as opposed to part of the solution."

Our world cultures today spring in the main from religious roots. UPF has played a significant global role in facilitating dialogue between different cultures and in particular dialogue between religions. Through these experiences we are confident that people of diverse cultures can share a vision to which all feel they belong, in which we are all part of the solution rather than each other’s problem.

To promote peace and cooperation we need a dialogue which brings us close enough to discover that which is best in the other; rather than maintaining the distance of ignorance, fear and mistrust through which we magnify each other’s failings and become ever more estranged. Our struggle to live in peace is not a result of the clash of irreconcilable cultural differences, but rather our inadequate practice of the central moral guidelines which all the great religions and cultures hold in common.  By identifying these essential values and constructing a common vision around them we can share a solution rather than our cultural diversity being perceived as a problem.  Founders, faiths and cultures hold as central that by practicing living for the sake of others, we become other-centred rather than self-centred. They all agree that the essence of good character is true love expressed through unselfish actions.

In August 2000, at the UN in New York, UPF’s Founder made a very important suggestion as to how we can re-balance our institutions and show a positive example of unity and cooperation beyond religious and cultural difference. The key is that we build unity on shared values and then apply those values to others beyond the limits of our own culture, race, nation or even religion.

Let me summarise what he said:

It is time that international organizations, which support the ideal of world peace, reconsider their relationship with the great religious traditions 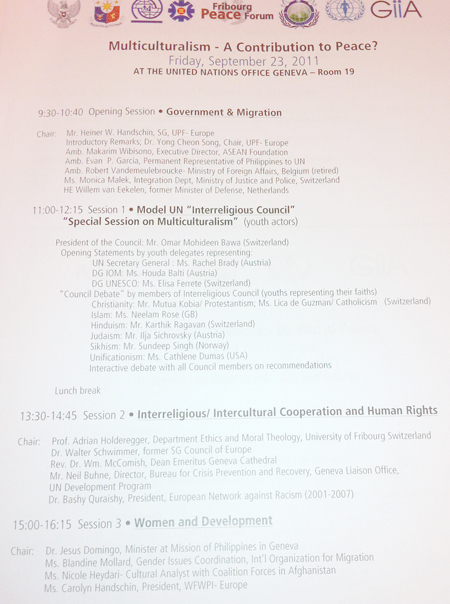 of the world and encourage mutual respect and increased cooperation between the world's political and religious leaders.

At their root, human problems are not entirely social or political, and so social and political approaches will always be of limited effectiveness.

Although secular authorities rule most human societies, religion lies at the heart of most national and cultural identities and has far greater importance in most people’s hearts than do political loyalties.

Religious people have not always been good examples in the practice of love and living for the sake of others, especially beyond the limits of their own culture. For this reason they should engage in deep self-reflection. It is time for religious people to repent for their preoccupation with individual salvation and narrow denominational interests. Religious leaders, who represent the internal concerns of the spirit should work cooperatively and respectfully with political leaders who have much practical wisdom and worldly experience about external material reality.

The existing United Nations structure, composed of national representatives, may be regarded as a congress where the interests of each member nation are represented.  I propose that each nation, in addition to its current UN ambassador, sends a religious ambassador to the United Nations to serve as a member of an Interreligious Council, or UN Senate. The mission of the representatives to this UN Senate would require that they have a genuinely ecumenical or interreligious consciousness and that they have the training and ability to teach a universal, transnational ideal of peace.

Such Ambassadors can provide a long term vision rooted in spiritual values which can complement the role of UN diplomats who often have relatively short periods of office and focus only on political approaches. They would promote movements dedicated to the realization of peace and social welfare and serve as conscientious guardians of high ideals such as justice, security, and peace.

I am delighted that in our next session youth delegates will be voicing their hopes for a peaceful future by enacting the work of such a UN Senate or Interreligious Council. We will not create world peace just through tolerance of others, guided alone by pragmatism, or motivated only by the desire for personal advancement. When young people dialogue from the foundation of love for the best in their own cultures and as a result discover that they share their most fundamental ideals and hopes with those from other religions and cultures,  we do indeed feel hope for our multicultural future. 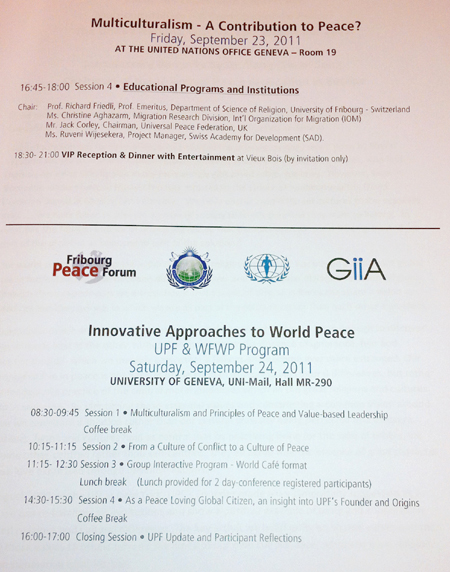 Such an Interreligious Council can become a role model for our multicultural society by demonstrating the ability to serve the other, recognize the view of the other, respect and love the other, listen to the other and learn from the other. The Interreligious Council can be a reservoir of humanity’s  great cultural heritage, a shining light of human maturity and an example of practical virtue; a Council of the wise, righteous and just, representing a shared vision and showing a substantial example of intercultural cooperation which can support political leadership by being the solution rather than the problem.

I commend this proposal for your consideration and suggest that you read Rev. Dr Moon’s full speech to the UN in 2000 which our staff will make available to you all.

Thank you for your kind attention.'