‘This new Government with the inclusion of the Liberal Democrats are bringing hope. The reviews and the inquiries into torture, counter-terrorism etc are positive. The moves to get rid of the surveillance society. The ending of the ID cards.' 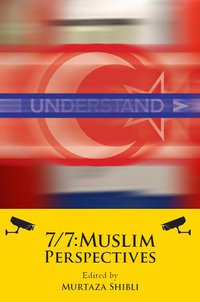 'The overriding message of this book also is hopeful that we can all live together.'

Murtaza Shibli wrote in the Guardian, 'Amid the pain and anguish of the London bombings, one significant narrative was lost – that of British Muslims. They became victims, both of the terrorists and of overzealous sections of the media, which accepted the terrorists' definitions of Islam and imposed them blindly on Muslim communities living in the UK. This strange symbiotic relationship between a section of our media and that of the terrorist groups has silenced and disenfranchised ordinary British Muslims.'

'The majority of British Muslims have watched helplessly as a section of the media has encouraged leadership of the Muslim community to be overtaken by fringe elements, whipping up passions through an iconography of angry Muslims, deployed to discredit the rest of the country's Muslim population. This tragedy has not only redefined and refocused the way Muslims are perceived by others, but, perhaps more poignantly, has also redefined the way Muslims see themselves.'

Tom Brake MP shared his memories of the day five years before. He remembered the eerie, end of the world feel around a shocked London that day. He felt the response to that day had been excessive with control orders, stop and search, photographs of public buildings but that the review of counter-terrorism and the inquiry into torture were making a new start.

Dr Shuja Shafi, Deputy Secretary General of the Muslim Council of Britain made a clear statement that Islam is a religion of peace. He affirmed that 'Attacks in the name of Islam are not justified!' This was not an attack of one community on another. This was an attack on an open society.'

There was a good discussion between the contributors of the book and the audience regarding war on terror and the persecution of Muslims in the UK and around the world.

Two contributors read passages that they had written. There were very intelligent and sensitive perspectives on their experiences after July 7th, 2010.

Robin Marsh concluded that there were many things wrong but at the same time there are many points that are right. More Muslim MPs had been elected in the last election. There may not be sufficient numbers to be proportional but sizeable numbers of anglo-saxon white citizens had voted for Muslim politicians. There are ongoing changes in society as Britain adapts to new substantial communities within it. We need to work harder to resolve the conflicts that exist.

17:40 Saadeya Shamsuddin – excerpts from her contribution

17:45 Laura Stout – excerpts from her contribution

19:55 Question & Answer: with the contributors [moderated by Murtaza Shibli]