The One Day Conference titled ‘Reconciliation and Forgiveness in Interpersonal Relationships and in the Community’, was chaired in the morning by Rev. Dr. Marcus Braybrooke and in the afternoon session by Imam Dr. Abduljalil Sajid, both distinguished figures in the interfaith world. ‘A very unique day for this UPF chapter,’ observed Rev. Braybrooke. ‘The most inspiring thing was the true stories of eminent people. They spoke with conviction, belief and understanding about peace. We looked at the importance of forgiveness in personal healing and how each of us has a role to play. You can curse the dark or light a candle, it all depends on your attitude.’ ‘The whole day was inspiring’ said Imam Sajid, ‘One human family serving one God, a powerful but simple message. Peace starts within us. There can be no interfaith without faith. What made this Forgiveness Conference different from others was the personal sharing based on the personal stories we heard during the day. This is quite rare in average conferences on forgiveness which are normally quite theoretical.’

Mary Braybrooke spoke about the value of restorative justice in her work as a magistrate. ‘Through facilitating a meeting between a criminal 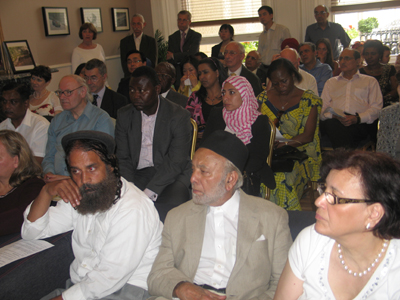 and a victim one can achieve a deeper sense of justice for the victims and often it turns out that the criminal is a victim too. It can produce apologies from the criminal and forgiveness from the victim, but sometimes it is just too hard to forgive. It is becoming quite an in thing and is even finding itself being used in the workplace to resolve issues there.’

Rania Gendy, a peace activist shared from the floor how only two weeks before the conference she was so disheartened and she was wondering if individual effort in peace activities made any difference at all to bringing peace in the world. Then she added, “ having spent one day together with people who care and are finding ways of reconciling, and listening to Manal’s story, I know each individual’s effort counts for something…..and am so happy and encouraged and congratulate UPF and everyone for such a wonderful day giving hope to everyone.

Vanessa Edwards, shared a beautiful story about a female offender who transformed her life by following Vanesa’s advice and taking a decision to look at life differently. About the day as a whole Vanessa said, “ It was such a nice and bright day for such a serious topic. Well done everyone!”

“For me the whole day was extremely worthwhile and meaningful,” Margaret said, “ as shared by many, the personal stories touched everyone’s heart. The most amazing story being that of Manal and Barbara. Manal spoke reflectively about how she lost fifteen members of her 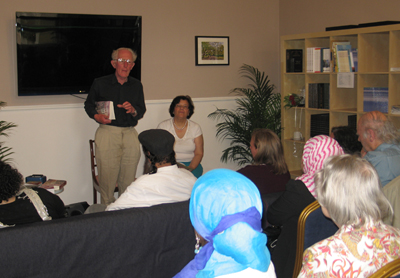 family in the last Israeli attack on Gaza. Her courage to turn her grief into reconciliatory efforts for peace was so moving. Barbara, a Jewish neighbour, reached out to Manal to console her in her hour of need. Manal

embraced Barbara’s offer and they started out together to work for peace. Participants could observe how the story was told with grief and yet with much love, understanding, warmth and a deep feeling of reconciliation, instead of anger, resentment and an unforgiving attitude. Manal told us all that, ‘It is hard, but there is a great feeling of overcoming anger when you forgive. It is still not possible to forget. One cannot forget nieces and nephews, one of whom was only 2 yrs old, who lost their lives for no reason! In fact I think it is good to forgive but always remember the victims.’ ”

Brenda Hodgson, who led the morning meditation, later commented that “There wasn’t a dry eye when Manal Timraz spoke from the heart about her reconciliatory attitude to do something about her grief.”

Rev Braybrooke said that "seeing the value and impact of sharing personal stories I am encouraged to recommend that we consider spending another day possibly in autumn to hear other stories that have transformed lives through people’s attitudes."  This was received enthusiastically by the  participants demonstrating the inspiration of the day.

Note: Imam Sajid and Rev Braybrooke have both written conference papers and books on the topic. This is one of the reasons why the conference attracted and inspired around 80 people throughout the day. The participants were not only from our Universal Peace Federation Community Cohesion and Interfaith Working Groups but also from the wider network of Ambassadors for Peace.

Some writers have identified nine stages in the act of forgiving.