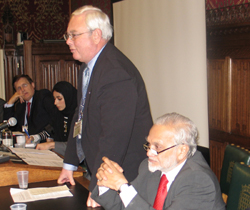 Speaking in the House of Commons Committee Room 12 to an audience of Members of the Lords and Commons and others from The Universal Peace Federation (a global alliance of individuals and organizations dedicated to building a world of peace) with Lord Bikhu Parekh and Yasmin Alibhai-Brown on the subject ‘Contribution of Immigrants to British Society’ Keith Best, Chief Executive of IAS, said that for too long the debate about migration has been based on poor statistics and prejudice rather than facts and this was the reason that the UK in the Transatlantic Trends survey of the USA and six EU countries comes out as the most anti-immigrant in its public sentiment.

“There is now general acceptance that migrants bring not just economic but cultural benefit to the UK, are hard workers and often do jobs that the British workforce is unable or unwilling to do. Migrants have given us our cuisine, art, literature and music” he said. “Against all the evidence of economic and social benefit come the ridiculous and wild assertions of some self-appointed so-called experts opposed to migration that migrants cost us £1 million each – an assertion on wholly flawed logic.

“Students bring more than £8 billion a year to the UK in their overseas student fees and spending power: they do not have the right to settle in the UK. Yet without those overseas students the academic institutions, many of the larger ones relying for more than half their total income on overseas student fees, would not be able to educate British domestic students as Prof David Metcalf, Chair of the Migration Advisory Committee, has pointed out.

“More people are coming for temporary purposes in a globalised world increasingly of circulatory migration which benefits both donor and recipient countries. Remittances are often a more effective way of helping an economy develop than official development aid.

“We are all migrants in the UK – it is just a question of when our ancestors arrived here. We have a rich diversity which is the legacy of Empire and Commonwealth that we should treasure. 8,000 people a week are leaving the UK to settle elsewhere – half of them are British citizens going to Australia, France, Spain and half are migrants who are returning home. This is the example of circulatory migration which will be a hallmark of the future.

“Even though parts of the UK may feel under threat by a massive influx of migrants and a majority of schoolchildren who do not have English as their first language these are issues that need to be addressed locally and do not reflect the situation throughout the UK. We can absorb and continue to benefit from the current levels of migration. About 10% of the UK population was not born here – compared with 25% in Australia, 20% in Canada, 14% in France and 12% in the USA – these are not countries on the brink of social disintegration as a result.

“We need to curb our xenophobia and accept the reality that increasingly people will make their own choices where they take their portable skills and choose to live – there are more UK citizens working and living abroad than there are EU migrants in the UK. These are the facts of modern day life.”