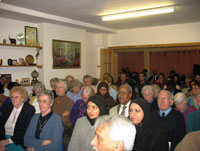 David and Patricia Earle held a meeting in their home who's purpose was to thank all the sponsors of the children in India, and others who have been helping them financially to keep the Interfaith Children's Home, in Hyderabad, India, running. It is now remarkably in its seventh year, and nine years since they travelled amongst the 'untouchables' and felt a calling to do something to improve the childrens' situation.

Many people turned out on a very wet evening, 124 altogether, and a lot of people brought their friends such that there were 26 new people in the audience. As usual, so many faiths, cultures and nationalities were represented. Probably forty nationalities. About 80% of the audience were women. Several young people were there, Theresa Earle had brought a friend from university, and there was a group of young Muslim women present who Patricia met when she took Tamara and Ali (Bereaved Families Forum) to speak in Birmingham University.

The Earles said, it was wonderful to have their 85 year old father there, and to recognise his life of goodness and the hospitality which he showed to so many hundreds of people in their lives.

It was a very bright, warm experience. The Earle's children sang a song to begin, 'You Raised Me Up', and then David gave a powerpoint presentation of the project, focusing on their last trip there in Sep/Oct 2006, and the efforts to secure a new piece of land. Everyone was amazed to see how the Interfaith Home's children had grown up and matured, with eight of them having graduated from the local school. Of those eight, seven had done well enough to get into Intermediate College (about the equivalent of our A' level system), and one will re-sit an exam in March. One boy, Suresh, is the first person from his village of 5,000 people ever to go to College.
Patricia spoke about her experience last year which was quite emotional, going back to see the children after three years away, and then they showed some video footage of their trip, arriving at the Home and greeting all the children one by one. This made the evening very personal for all the sponsors, to see their child more intimately.

One highlight of the evening was Rotarian Dr Peter Patel publicly re-committing himself and the Rotary Club, in front of everyone, to the Interfaith Home's development, once new land is acquired.

They concluded by reading some words from different faith traditions, and then drinking a toast to 'peace in our lives, in our families, our society and our world'. It was not a simple matter to share together, packed in the meeting room, living room, and dining room. After the toast, they enjoyed food and fellowship together; some food that had been bought and some food that was provided by many of the guests. There was a dynamic, bubbling atmosphere, with most people staying for quite a long time.

Although they did not really focus on fundraising, as that was not the purpose of the evening, they still received about £400 in donations from everyone's generosity.

They received a lot of help - technical support from Tom Knight and Tommy Pritty, transport from Tom Knight and Richard Dirnhofer, food preparation, serving and washing up from Tomiko Reilly, Grace Barata and Heidi Timms, and singing, serving and taking care of the guests from the Earle's children. Needless to say, they were happily exhausted by the end of the evening.