was founded to support the academic community’s role in the pursuit of world peace. PWPA publishes books, the International Journal on World Peace, organizes conferences, and is a network of academics from around the world. It was founded in Korea in 1973 and presently has chapters in over 100 countries. It was very active in the UK in the 1980s convening a major congress entitled 'Liberal Democratic Societies: Their Present State and Future Prospects' in 1989.  We wish to revive the British branch in the UK, named The British Academy for World Peace as there are a number of issues that could benefit from its cross-disciplinary and inter-religious approach. 9 July 2008 - The British Academy for World Peace, in partnership with UPF, held a book launch and special presentation by Professor Lord Bhikhu Parekh in London. Lord Parekh laid out the context of the dialogue between Muslims and the indigenous European community by looking at the stages of immigration and the resulting pressures these brought. 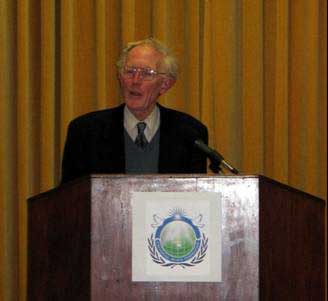 Jewish people have a tradition to obey the law of the land they live in since the time of the Prophet Jeremiah. The Jewish court, the Beth Din, is a religious court between two parties who desire its judgement in their case. The courts judgements can be ignored and the case can revert to the civil court. The Jewish community has received the right to have its marriages recognised by civil authorities and to marry outside a synagogue. Rabbi Franses praised the democracy in the UK that has provided an equality under the law that a theocracy could never provide. Under such a democracy it is possible for us to unite beyond race, religion and cultural backgrounds. What is Shari'ah and can it be incorporated into British Legal System?

The Muslim Council for Religious and Racial Harmony

Shari`ah literary means mode and path. However, religiously the term "Shari`ah" is used for the laws of Islam. The word Shari`ah in its various derivative forms is found in five different places in the Holy Qur'an.

Shari`ah is the set of rules derived from 1) the Holy Qur'an which Muslims believe is the word God revealed to Prophet Muhammad (peace be upon him) over 23 years, ending in 632 CE, 2) the authentic traditions (Sunnah) of the Prophet (peace be upon him) or example of the Prophet Muhammad, whom Muslims believe was divinely guided and 3) the scholarly opinions (Ijtehad) based on the Holy Qur'an and Sunnah. All Islamic teachings can be divided into two main parts: a) those that relate to the belief-structure of Islam, and b) those that relate to the practical aspects of human life. The former is known as Al-Hikmah (or the philosophy) of Islam and the latter is termed as Al-Shari`ah of Islam. The shari`ah deals with the ideology and faith; behaviour and manners; and practical daily matters e.g all aspects of human life. "To each among you, we have prescribed a law and a clear way". (The Holy Qur 'an 5:48). Shari`ah is a human interpretation of the sacred text of the Holy Qur'an and Sunnah.