The final Session of the European Leadership Conference to commemorate the 63rd Human Rights Day entitled, 'The Prevention of Sexual Violence Especially in the Eastern Democratic Republic of Congo', was chaired by the host, Dr Charles Tannock MEP.

The first speaker Humphrey Hawksley, the BBC World Affairs Correspondent and author, (photo below - next to Charlotte Simon) in a call for new legislation in the EU, compared the efforts of the United States in this matter with the inadequate response of the EU to the 'conflict minerals' that are to be found in many of our laptops and mobile phones. As much as 80% of the world's coltan comes from Congo. Most of these are sourced from the eastern Democratic Republic of Congo (DRC) and fund and give rise to the war torn region's violence and notorious rape statistics. (for more information see Hawksley's article in Yale Global Online).

The final speaker was Charlotte Simon,  (photo right on right) who originated from the eastern D.R.C. but who now lives in the UK, gave a personal testimony of her hometown when there was an invasion by Rwandan troops in the 1990's. She spoke passionately of the need to stop the killing, rape and torture in the region that occurs with impunity. She emphasised that between 5 and 10 million people had been killed in eastern DRC in the last 40 years conflict.

Following this, Chris Yates, Vanessa Bateson and Kate Downey,  (photo below) have formed their own pressure group on this issue, described the link between the coltan used in most high tech gadgetry in most homes in developed nations and the violent oppression of the mining communities in eastern DRC that is a major global source of the mineral. (link for more information) The staggering number of rapes and the impunity felt by the perpetrators in this lawless region make the area one of the worst places for human rights abuses in the world. Chris Yates stated that the eastern DRC is commonly described as the 'rape capital of the world'. They, as a group said, that pressure on a corporation's shareholders and consumers, could lead to a more rapid reduction in the mining of conflict minerals than legislation. They quoted the four years taken to bring in the 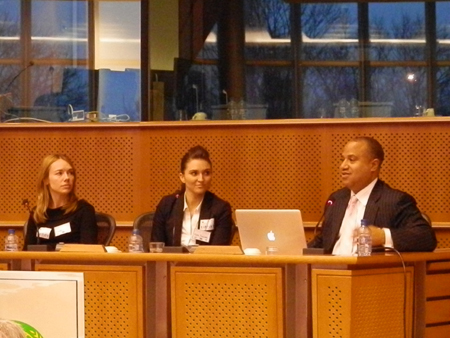 U.S. ‘Dodd Frank law’ that has still not been implemented.

Charles Tannock MEP later raised this question with senior EU officials who agreed with the need for legislation. Subsequent meetings on this topic are being planned. (If interested please contact This email address is being protected from spambots. You need JavaScript enabled to view it.)

Concluding remarks for the session and for the conference itself were offered by UK UPF Secretary-General Robin Marsh. This included a warm vote of thanks  to Charles Tannock MEP for his willingness to host the last two sessions of the conference in the Parliament and for his excellent, sensitive and inclusive chairmanship of proceedings. This drew a warm round of applause from the 100 or so participants. Robin Marsh explained that from a civil society perspective, the Universal Peace Federation and the allied Women's Federation for World Peace’s slogan is that the world is 'one family under God'.  We consequently have to be concerned about those that are suffering the most as in a smaller family the care and attention is drawn to those who are in difficulty. Education is also a big issue for the young men involved in, or growing up around, this conflict, to change their behaviour and attitude towards women.