In a session entitled Women’s Empowerment and Human Rights organised by the Women's Federation for World Peace, a powerful panel of activists, experts and campaigners reviewed the progress of women's empowerment. Lady Fiona Hodgson CBE, Dr Krishna Ahoojapatel, Ms. Aisha Abdul Latif, and Carolyn Handschin made presentations on women's empowerment. Lady Hodgson was preseented with an Ambassador for Peace award at the conclusion on the session in recognition of her efforts to support women's empowerment in very dangerous circumstances in Afghanistan.

Dr. Krishna Ahoojapatel is a Professor of International Relations, a representative of WILPF to the UN and a Co-Presenter of the CoNGO Committee on Development. Only in 1998 Dr. Krishna decided to concentrate on Women’s Rights. She stated that women now make up 60% of the population, therefore, why, when women are the majority, are they treated like the minority?! Only 37/200 countries have female Presidents or Prime Ministers and in Africa, land can be acquired by women but not controlled by women. Out of 111 countries, the ILO found NO countries in which women received equal pay. Dr Krishna said that when we think of the struggle of women, we need to think of it globally. What is happening in other countries? It is important not to look at women as victims but as a huge power in the world.

Ms. Aisha Abdul Latif, who is a Consultant for the Office of the Immigration Services Commissioner (OISC). Aisha represents women who travel from abroad to marry in Britain and who, after or during the two year visa probation period, have had to leave their partner. They then need their partner to support their application and if they refuse to, many problems are caused due to the fact that the power is always in the hands of the British spouse.

The woman can suffer a lack of awareness about the things she can do about this, cultural barriers and fear of reprisals from the husband and his family. Aisha explained that one victim that she worked with was locked in a cellar for two years. After six months of intensive counselling, she finally disclosed the violence she suffered. However, she received death threats from her community and her husband so she returned home. Another Ugandan woman came to the UK to live with her husband who also subjected her to domestic violence. She contacted the police and was placed in a women’s refuge. Her case was successful and now she is qualifying to be a Human Rights Lawyer. Aisha explained that empowerment of women will only come through education and support.

Carolyn Handschin, President, WFWPI - Europe, has been attending the Human Rights Council with Dr. Krishna. She spoke about how the idea of empowerment sounds idealistic but can be a reality. She explained that if women living in rural areas of developing countries had more support, 150 million people could be saved from poverty. Even knowing this fact would be empowering for these women. Women also need access to dignity and this can be done just by knowing our own goodness. 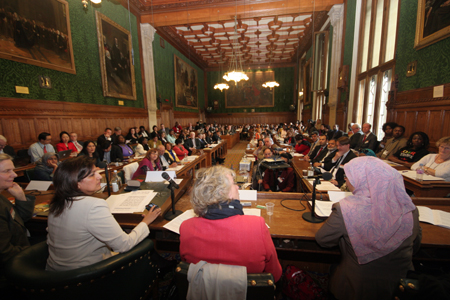 She is President of the National Conservative Convention, and is also a member of the Conservative Human Rights Commission. Lady Hodgson works on a variety of women’s issues, especially in the context of developing and conflict countries.   Through travelling to Africa and working on the Conservative Party’s Project Umubano in both Rwanda and Sierra Leone, she feels passionately about the need to help more people in Africa have access to good healthcare. As well as being a Trustee of the Chalker Foundation, Fiona is a member of the All Party Group on Women, Peace and Security, Chairman of the Advisory Group of GAPS (Gender Action in Peace and Security), a member of the Association of Oxfam, a member of the Leadership Circle of Women for Women and on the Advisory Board of WPD (Widows for Peace through Democracy) and a Patron of Afghan Connection.

It was Krishna who came up with the now-famous UN statistic about women: “Women are half of the world’s population, do two-thirds of the work, get one-tenth of the income, and are the owners of one per cent of the property.”  In 1962 she joined the UN, a career that was to span 25 years. Professor of International Relations, Representative of WILPF (Women’s International League for Peace and Freedom) to the UN, Co – President to the CoNGO Committee on Development, Dr Ahooja-patel has worked tirelessly, with and for women, for the sake of peace, freedom, religious reconciliation and disarmament.

Vice President of Women’s Federation for World Peace (WFWP) International and President of WFWPI in Europe, Deputy Director of the WFWPI Office for United Nations Relations and its Permanent Representative to the UN in Geneva since 1997, Coordinator of the UN Office of UPF in Geneva, Carolyn Handschin has been contributing to the work of the Human Rights Council in the areas of peace-building, leadership and governance, women’s human rights and their empowerment, education for peace and fulfilling the MDG’s. Previous Secretary of the UN-NGO Committee on the Status of Women and current member of the Committee, as well as the Working Groups on “Peace”, and “Human Rights Education and Learning” at the United Nations in Geneva.  She contributed to the NGO task forces on “Disarmament” and “Culture of Peace”, the latter of which she chaired. She is a Founding member of the Fribourg Peace Forum in Switzerland and Co-founder/Vice-President of the Geneva Interfaith and Intercultural Alliance (GIIA) currently coordinating its “Youth Interreligious Council” Model-UN program.