Renowned scholar Professor Akbar Ahmed is on a tour around Europe on a research project to write a book on, 'Journey into Europe: Islam, Immigration, and Empire'. Last night UPF-UK had the honour to host one of the programmes on the tour. The tour is being supported by 'Muslims, Trust and Cultural Dialogue' represented by Prof. Peter Morey and others last night. One of Prof. Ahmed's team, Asmaa Soliman, who is also a core team member of YouthUPF, was the MC and one of the main organisers of the event.

Professor Ahmed explains, 'The lessons of a society in which different religions and cultures can live together, create art together, and worship freely while respecting each other, is a desperately needed model to guide us today.' He highlights several eras in European history, like Cordoba's 'La Convivencia' when this occurred. Please see below for the written exlanation of the Tour.  Photos http://bit.ly/1taBM3P

I had the opportunity to introduce Universal Peace Federation and mention Father Moon's response to 9/11 was to sponsor three intra-Muslim dialogue conferences in Jakarta, London and Washington DC at which the then President of Indonesia (Gus Dur) Wahid and his wife participated along with many other dignitaries from across the Islamic world.

Last night was an opportunity for Prof Akbar's team to feature the artists in his documentary and to interview them. They think that the sphere of arts and culture is relevant and want to shed light on Muslims' involvement in creative arts that is unfortunately often ignored in mainstream media. This was organised in collaboration with 'Rumi's Cave' including comedy, poetry, song, art and rap.

Professor Ahmed introduced Commander Mak Chishty of the Metropolitan Police explaining that he is the highest ranking Police Office from a Pakistan community background. He is currently the Commander for West London with pan London responsibility for Anti-Social Behaviour, Drugs & Alcohol, Hate Crime and Children & Young People. He is the national lead for the sensitive area of honour killings on behalf of the Association of Chief Police Officers, helping to formulate policy on a national level. Commander Chishty emphasised the need to counter alienation among young people that leads them to fight in Syria or similar conflicts.

Over the last decades I have committed myself to understanding and explaining the complex relationship between the West and the Muslim world. After 9/11 it became a matter of urgency for me to both explore and explain the relationship as the gap between the two had opened dangerously wide. I believed it was not possible to understand what was happening in our world without exploring the different societies and points of view that were involved. In particular I worked on three major projects, all published with Brookings Press, related to this theme - exploring what Muslims thought of the US and the West, how Americans, in turn, perceived Islam and Muslims, and an examination of the interstices between states in those tribal and peripheral societies where the real "war on terror" is taking place. The first study resulted in Journey into Islam: The Crisis of Globalization (Brookings 2007); the second was called Journey into America: The Challenge of Islam (Brookings 2010; Winner of the 2011 American Book Award) and the third The Thistle and the Drone: How America's War on Terror Became a Global War on Tribal Islam (Brookings 2013; Winner of the German Peace Prize and short-listed for the Coca-Cola Award for Best Non-Fiction Book at the 2014 Karachi Literature Festival). To complete the quartet, I will explore an area that is vital to the understanding of relations between the West and Islam, the Muslim communities of Europe.

Complicated and controversial issues including Sharia, jihad, terrorism, Muslim female dress, in addition to the fear of being overwhelmed by migrants, especially from Muslim lands that were dominated by Western imperialists not that long ago, haunt Europeans. Issues of Islam, immigration and the former empires and their legacies provide a frame to analyze Europe and its relationship with Islam today which I will explore in a new study, Journey into Europe: Islam, Immigration, and Empire. In order to investigate these crucial issues, I intend to embark with a team of scholars and researchers, 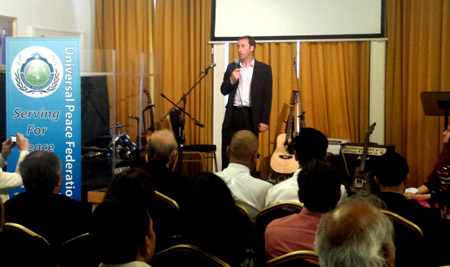 who have worked with me on my previous projects, on a European tour. We will travel, conduct interviews and questionnaires, observe and read in order to explore the questions that have been raised above.

For the British leg of our journey, we will be working with team members from Professor Peter Morey's Muslims, Trust and Cultural Dialogue project. Funded by the Research Councils UK as part of their Global Uncertainties scheme, this project shares our goals of understanding and exploring what makes for intercultural and interfaith understanding. MTCD are providing researchers and logistical support as we travel around the country conducting interviews with selected individuals and groups who may be able to shed new light on the actual state of relations between Muslims and others. They are assisting in gathering and processing data and the project website will provide an initial portal for our findings as they emerge.

Using these various media, Journey into Europe will add to the already rich literature on the subject. Because it is based in extensive fieldwork interviews, the study will convey the urgency of the situation and also the wisdom of the people we will meet through the length and breadth of Europe. In that way, we will be able to contribute to building bridges between the different religions and cultures of Europe.

I propose to examine the following thesis: the European historical experience with Islam has much to teach us today about relations between the West and the Muslim world. It provides us with examples of communities living together, producing art, architecture and literature of the highest quality, while belonging to different religions and cultures and maintaining their own integrity. Muslim Spain and Sicily a thousand years ago provide us early examples. We read of a Muslim king whose chief minister was Jewish, and so powerful that he had his son appointed as his successor; the chief physician of the most powerful Muslim ruler of what we now know as the Middle East was recognized as one of the greatest Rabbis of those times; and the Christian Norman king who, after conquering Sicily, treated his Muslim subjects with respect and even encouraged the preservation of their culture (while, at the other end of Europe, his kinsmen were persecuting and oppressing fellow Christians in England). The scholars of the time lived and worked in what had become the shared culture of Andalusia and used Arabic as the lingua franca. Averroes and Maimonides both born in Cordoba wrote their great works in Arabic. Historians call this coexistence between Jews, Christians and Muslims La Convivencia. There are also other examples of Christian kings, like those with a Germanic background like Frederick II, who embodied this spirit of La Convivencia.

This discussion about Europe and Islam can, in turn, assist the West in its interaction with Islam and the ongoing - and increasingly amorphous - "war on terror." However, to learn from the examples in European history, we must get past the widespread and distorted stereotypes the West and the Muslim world have about each other.

Given the seriousness of the situation, with news stories about intercultural mistrust appearing almost everyday, Journey into Europe is a vital exercise. The lessons of a society in which different religions and cultures can live together, create art together, and worship freely while respecting each other, is a desperately needed model to guide us today. Taken together, it is my hope that this book can offer new insights into how both the differences and similarities in the relationship with Islam in Europe and the United Stated can render a positive contribution to furthering individual governments' and people's efforts in coming to terms with our joined twenty-first century's multicultural and pluralistic realities.