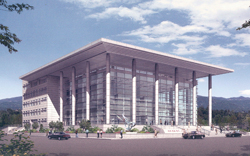 KCNA Video of Memorial Altar visited by important guests who bring a wreath from DPRK leader Kim Jong Un and they present a Korean Reunification Award to Father Moon for his many efforts for the unification of North and South Korea. KCNA video of the award ceremony.

International Chairman of the Universal Peace Federation, Rev. Hyung Jin Moon and Pyeonghwa Motors President Sang Kwon Park have traveled to North Korea this morning, September 7th. Both entered North Korea through Dorasan Inter-Korean Transit Office in the city of Paju in Gyeonggi-do at 8:25 am. The purpose of visiting North Korea is to receive condolences from relatives of Rev. Moon and the leadership of North Korea.

Jung Un Kim, First Chairman of the National Defense Commission of North Korea, sent a letter of condolence to the family of Rev. Moon on September 5th. Will North Korean leader Kim Jong-un visit the memorial altar of Rev. Sun Myung Moon at the World Peace Center in Pyongyang to show his respect to Rev. Moon and his family? Now, many citizens of Pyongyang, including the North Korea leaders, are offering their sympathies to and burning incense for Rev. Moon at the memorial altar.

Pyeonghwa Motors president Sang Kwon Park mentioned that it may be difficult for North Korea to send condolence delegations to South Korea. However, two days after his return to the South, he has returned to North Korea with Unification Church International President Hyung Jin Moon. It seems that the leadership of North Korea including First Chairman Jung Un Kim want to express their sympathies to Rev. Moon's family directly. International President Hyung Jin Moon and his party will return after receiving visitors at the memorial altar in Pyongyang.

International President Hyung Jin Moon and Mr. Sang Kwon Pak visited North Korea and offered condolences to the bereaved family when Kim Jong-il, the Chairman of the National Defense Committee died. The hometown of Rev. Dr. Sun Myung Moon is located in JungJu, Pyeonganbuk-do; and approximately 70 relatives, including a younger sister of Rev. Moon, reside there.

The memorial altar has been prepared in the Unification Church owned World Peace Center located in nearby Botongkang Hotel in Pyongyang. A building dedication ceremony for the five story Centre was held in August of 2007.