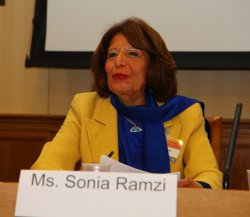 To conclude, I will quote Dr Boutros Boutros Ghali: “The defence of human rights no matter what our engagement, our determination, our will could be disregarded if we do not create, at the same time, conditions for peace and shared sustainable development.” The construction of peace is a concept that the former Secretary-General of the United Nations, Dr Boutros Boutros Ghali launched and for which he keeps on working untiringly. The construction of peace can be found today in the Universal Peace Federation and Women’s Federation for World Peace, joined together in this historical and prestigious place the Houses of Parliament, outstanding and exceptional builders who, with UNESCO and the United Nations, constitute the real conscience of the world.

Dr Boutros Boutros Ghali, former Secretary-General of the United Nations and President of the International Democracy and Development Panel of UNESCO, regrets not being able to be present today in London to vigorously share, with all of us gathered here, the conviction that has always filled and motivated his consideration and his noble action, that of Human Rights. He asked me to express his gratitude and to address his sincere thanks for acting together to advance the cause of peace, Human Rights, the Rights of men, the Rights of each man, of each woman, of each child…

Today on the world level, the values of Human Rights, of liberty, of democracy, of equality between human beings or at least between citizens, of men and women before the law are rarely contested. That does not mean that these principles are everywhere effectively applied and respected. Far from it. In a good number of countries, notably in Europe these principles are functioning in practice. Elsewhere, where they are flouted or are only partially respected, those responsible generally do not dare to admit that they do not accept these principles, even less that they are hostile toward them.   (Photo Link)

Between these two poles, there are a good number of countries today which are making admirable efforts thus expressing a genuine desire of change. Other countries progress with the desire of obtaining a certificate of approbation and of reaching a respectful place in the family of nations.

But it is above all Civil Society and notably the young, as we see in the Arab Spring, who demand loudly and strongly and with determination their rights thus pushing history toward democracy and human rights. These are profound and rapid transformations which the Arab regions are currently experiencing.

We can only observe that the Civil Society have shown that true democracy goes beyond the simple institutional framework and is expressed as a state of mind, a mentality of tolerance and respect of others based on a collective and active participation of the citizens.

The question which comes to mind now: How can we contribute and act in sincere modesty and efficiency:
1. to break the resistance and opposition to Human Rights by some and:
2. to support by an active and operational solidarity the engagement of the Civil Society on the path of democracy and human rights?

I would like to share some thoughts and propositions with you. They are rooted in the developing countries, notably those whose populations are on the path and the arduous quest of fully recovering their rights.

Men, women and children wish to live in peace. But this peace is long in coming, with war taking various forms from civil war to ethnic genocide. Too often human beings trapped in poverty, illiteracy and ostracism are ignorant of the existence of these fundamental rights, and they are unaware that every individual has the right to life, liberty and security. It is war and conflicts that provoke the worst violations of the most basic liberty and human rights.

And we would all agree that peace constitutes the primary, indispensable condition for the protection of human rights and the promotion of democracy.

Also, if war rages in a region of the world, how can human rights be respected? Since the beginning of the Second World War a United Nations report, prepared 10 years ago, had already given a total of more than 700 wars and conflicts around the world that had already caused the deaths of several million people.

The enormous financial expenditures appallingly squandered for death and destruction could have allowed the construction of thousands of schools and hospitals and simply allowed mankind a better future. It is not in a gathering such as ours meeting today, in which we are profoundly galvanised for peace, that I would allow myself to take more time to develop an argumentation against wars and conflicts.

Actually, Europeans are very advanced today in the field of human rights, they are the most advanced. Also, they are raising a lot of hope among populations: I will notably talk about those from the Arab region who crave for the same liberty, for democracy and for a better standard of living.

This credibility and this confidence deserve to be saved, renewed and reinforced.

To that effect, we should avoid using Human Rights as a diplomatic and political weapon to put pressure on some countries and not on others, especially when it is used for other goals linked to special interests. This behaviour is even more regrettable as it weakens and discredits the actions of the real defenders and actors in the field who struggle to promote Human Rights.

Also, a number of countries reproach the use of a double standard saying, ‘there are countries that are accused of everything, on which others are ready to swoop down upon with force, and other countries which break the rules with respect to the fundamental rights of man and risk nothing.’ This selective behaviour according to political or economic interests shows a manipulation of human rights which provokes disillusionment and rejection.

The disillusionment that this manipulation arouses today must be taken into consideration and must be opposed at all costs, otherwise it could cause a withdrawal into an ethnic identity, extremism of various types, notably religious, and thus ending with the rule of fundamentalism and to non-democratic authoritarian regimes which would be a big, step backwards.

Democracy is an inestimable value and the fundamental condition for the application of human rights which must also be fairly promoted to individual countries but also between countries on an international level. Why can’t all countries accept the results of a transparent, democratic election even when the result goes against their wishes? This creates anxiety and doubts even among the biggest and most devoted defenders of democracy.

So, let’s act together with determination in all sincerity, without telling others what to do, to support concretely the engagement of Civil Society, of universities, of youth and feminine NGOs for democracy and human rights.

WE HAVE A DUTY OF SOLIDARITY

Arab societies and notably the young people expressed a real will to fulfil a responsible role and an active use of their citizenship to make changes in order to improve their countries. The young who were demonstrating in Tahrir Square in Egypt expressed loudly and clearly their role as citizens who are giving their opinion on the measures to be taken in order to determine the future of the country.

Therefore, it is necessary to promote a culture of active civic participation, a culture advocating universal values of liberty. But how?
1. Awareness campaigns promoting a culture of democracy, of human rights and of the active use of citizenship can, to that effect, take place jointly with UNESCO and other national and international NGOs on a local or national scale.
2. Meetings between young people and adults from different countries which allow through a project or a common topic, for instance heritage, to reinforce bonds of cooperation by the exchange of ideas and experiences linked to democracy and development.

I will give as a unique example the university network which I had the honour of creating and managing at UNESCO when I was in office of UNESCO UNIVERSITY AND HERITAGE FORUM. This network is made up today of 400 universities on all five continents and has been able to make, thanks to the theme of global heritage as a common denominator, hundreds of projects joined by students and teachers from different backgrounds.

These projects have allowed a mutual development between cultures, a concrete and operational practice of global citizenship.
All of these support actions need engagement, efficiency and means.

Therefore, the motto which I suggest is:
Replacing 1 tank = 10 million dollars for 10 schools

To conclude, I will quote Dr Boutros Boutros Ghali: “The defence of human rights no matter what our engagement, our determination, our will could be disregarded if we do not create, at the same time, conditions for peace and shared sustainable development.” The construction of peace is a concept that the former Secretary-General of the United Nations, Dr Boutros Boutros Ghali launched and for which he keeps on working untiringly. The construction of peace can be found today in the Universal Peace Federation and Women’s Federation for World Peace, joined together in this historical and prestigious place the Houses of Parliament, outstanding and exceptional builders who, with UNESCO and the United Nations, constitute the real conscience of the world.