A New Vision for Cooperation between Europe & Africa 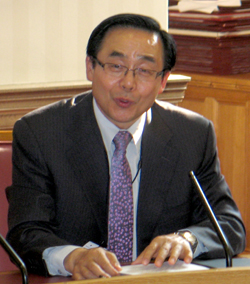 It is wonderful to see you all gathered here today to commemorate Africa Day 2012. Let me warmly welcome you once again and thank you for taking time from your busy schedules to be here with us.

Europe and Africa together have a dynamic history marking the ebb and flow of empires. Currently the relationship of the last few hundred years is undergoing a change pointing towards greater economic convergence through which it is appropriate to consider, ‘A New Vision of Cooperation between Europe and Africa.’

UPF’s vision of humankind as an inclusive family of a loving God points to a time where all peoples can share fairly the resources of our planet in a conscience-directed life. Economic convergence between formerly wealthy Europe and an impoverished Africa is not a threat to humanity seen from this perspective. It is an opportunity for the human family to benefit from the undeveloped talents that have been cursed by malnourishment, preventable diseases, discrimination, lack of education and economic opportunities and the lack of adequate health systems. Compounded by poor governance, inadequate infrastructure, tribal and religious tensions and exploitation by other areas of the world, this truly has been a sad era in which a majority of nations comprising Professor Paul Collier’s ‘Bottom Billion’, who have not experienced development since the 1980’s, are African.

Like so many of you, I have been fortunate to have the opportunity of getting to know both continents well over the past twenty years. In that time I have come to truly love both Africa where I spent many years in Kenya as a missionary and Europe, where I have lived the last eight years. My experience on both continents has given me a deep appreciation of the special qualities and potential of each.

The vision and hope of UPF’s Founders, Reverend and Mrs. Sun Myung Moon is vast and extends to such projects as the construction of a massive International Peace Highway linking all the hitherto separated and divided parts of our world and of the divided human family with each other. Not least, it would connect Africa and Europe through that superhighway by means of a tunnel under The Straits of Gibraltar. This would enable one to drive from Cape Town to Helsinki or Moscow and to rapidly carry both people and goods while greatly facilitating trade and human interaction. The promotion of a similar project across the Bering Strait between Russia and the United States is

The development of oceanic industries, as well as fish farming, has long been a passion of Father Moon given the need to maximize resources to supply growing populations.  A substantial period of his life has been devoted to developing these industries in order to prepare for the future and for the character development that life at sea demands. He has also promoted fish farming to greatly multiply food resources compared to resource intensive meat-based diets that are destined to become increasingly expensive in a world of growing populations, and vastly expanded numbers of people with middle class incomes.

In that conference Dr. Andrew Nevin, a leading Strategic Thinker, and the Strategy Director of PricewaterhouseCoopers LLP, summarised the future economic trends affecting Europe and Africa posing the question, ‘Does Africa Need Europe as Much as Europe Needs Africa’?  Six out of ten of the world’s fastest growing economies are in Africa. China became Africa’s number one trading partner in 2009, surpassing the United States. This trend is likely to continue with Africa being a place of intense resource competition in an era of state directed capitalism.

Governed by the military-first, one-party rule, China has been in good terms with militaristic dictators of Sudan and Zimbabwe, because, unlike Europe and America, China does not interfere human rights or democracy in the countries concerned. Rather, it provides weapons and military advisers to support the militaristic regimes, while purchasing oil and offering any economic assistance the dictators require.

These days, however, in the central and southern Africa where China has been engaged in economic development and exploration of natural resources, popular animosity towards China is mounting. For instance, China makes 'tied' investment conspicuously favoring Chinese companies and laborers, thus, establishing Chinese colonies. Chinese investment does not always lead to improvement in local employment nor solve poverty problems. The exceptions to this have been the Democratic Republic of Congo and Angola who insisted on a proportion of indigenous workers in agreements with China. This could be copied by other African nations.

In a conference in Abuja, last July, to which European UPF sent 120 delegates, Dr. Hyung Jin Moon, UPF’s International Chairman, added that true and lasting peace cannot come from a secular, human origin. "Lasting solutions to the critical problems faced by the people of this region call for a spiritual awakening and the full participation of those who affirm and practice spiritual principles," he said. Yet, religious passion alone is not enough, he concluded, "As religious leaders or believers, we must be ever vigilant in preventing the corruption of religion that can lead to narrow fanaticism and even violence."

At that same conference Dr. Thomas Walsh, UPF International President, emphasised the "commitment of UPF in Nigeria and in Africa at large to promote interfaith cooperation, good governance, strong marriage and family, and character education for youth."

These are core goals of the Universal Peace Federation in its quest to support both Africa and humanity to establish a world of mutual prosperity and peace.