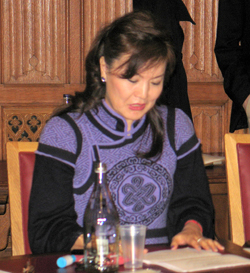 Association for the Development of Mongolian Women in Europe

I am honored to speak today at this esteemed place about Women, Mongolian women.

First of all, using this opportunity, I would like to greet A Happy Mongolian New Year-The Year of the Dragon on behalf of the Mongolian community in Europe, especially women in the UK and I wish you Strong health, Success and Prosperity!

Secondly, A Happy International Women's Day to all the women, who have gathered here this evening. As you all know, Mongolia is becoming very popular now and is an eye-catching country. It has been this way since the first and biggest  “Chingess khaan” empire, which was the greatest Empire the world had ever known.   Today, I do not want to repeat those politician’s and business people’s words about Mongolia’s richness in mineral resources, the highest economic growth in the world of 17% that we made last year, or the 20th year celebration of true democracy we made, in comparison with our powerful neighbor countries - Russia and China.  I usually speak on those matters because of my work, with a career of 26 years devoted to the Central Bank of Mongolia and the people of my country.

But, today, I will talk on a completely different subject, 1) about the woman’s role in Mongolian economic development, and especially on the women’s initiative in Europe 2) gender equality in Mongolia and 3) few words of cooperation between Mongolian and British women organizations and communities. This is my second talk on this matter after the seminar  “One World -the Role of Women” the event organised by the Association for the Development of Mongolian Women in Europe on 8 March 2012 in London

The Association for the Development of Mongolian Women in Europe was established in early November 2011 and is made up of 9 enthusiastic and forward thinking ladies who are the Members of the Board. To my surprise, word has travelled quickly and we have heard in the last few months from many people who wish to be members of the Association.

I am very proud of Mongolian women and Mongolian history. We remember that Mrs. Sühbaataryn Yanjmaa was Head of State of Mongolia in the 1950s. I could name many more strong powerful Mongolian women and many of them are with us today, Mrs. Marta Bira, CEO of Mongolian Culture Centre, Oyanaa Choijilsuren, Chairman of the Mongolian Business and Trade Council in the UK. I am inspired by these women’s initiative to devote their lives to Mongolia.

Our members and women who are interested in our activities all come from different professional backgrounds, and they are already working or running their businesses in the UK in areas such as banking, law, media, public relations, as linguistic professionals, in creative design, music and art, beauty therapy and many more. 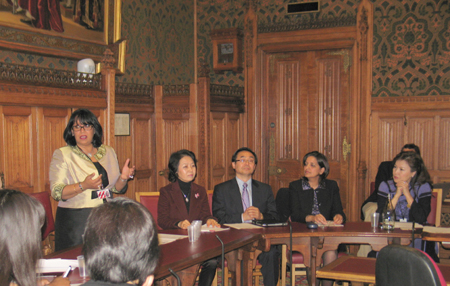 Our friends and families, volunteers, generous donors and supporters make these aims a reality and recognize the importance of the unity of Mongolian Women in Europe and across the world.

Since November 2011 we have been involved in a number of events that have been organized by The Mongolian Cultural Centre in London, The Mongolian British Chamber of Commerce and Social Democracy Mongolian Youth Union, to show our work and aims to the Mongolian people and our British and European allies. Using this opportunity, I would like to thank these organizations very much for their great support. This Association is not a gender related organization. Its door is open to anyone who is willing to support Mongolian Women's development and to share valuable skills and advice.

When the Board Members were thinking about a project to run which would be beneficial to our fellow Mongolians back in our home country, we all agreed that vaccination of young girls aged between 10–14 years against cervical cancer is an essential matter in Mongolia. As a result we have contacted the Ministry of Health of Mongolia to get more detailed information.

The Population of Mongolia is approximately 2,7 million. Young people aged 10 -24 years of age account for more than half of the population. This shows that Mongolia is a young people's country.

Among the female population, cervical cancer is the second most common cancer and it has become a major health concern in Mongolia. Hence, one of our priority projects is aimed to protect the future Mongolian mothers. So, our aim is to gather as much support from our friends and allies as possible to do our research and make funding to vaccinate Mongolian girls.

Let’s move to my second topic about gender equality in Mongolia.  Before to start, I would like to give some statistics and factual information.

In Mongolia, we have a favorable legal infrastructure for women equality:

•The Constitution of 1992 guaranteed equal rights to all citizens.

•The Law against Domestic Violence and The Gender Equality Law adopted in 2004 and 2011 respectively.

•A National Programme on Gender Equality for 2002-2015 as well as Millennium Development Goal based National Development Strategy for 2007-2021 was approved.

• The National Gender Committee of Mongolia was established and is chaired by Mr. Batbold, the Prime Minister of Mongolia.

We all very much appreciate for those people who made political commitment and build the legal and institutional infrastructures, which are sufficient for gender equality in Mongolia. However, Mongolian women have been under-presented in politics and sectors with higher pay and managerial positions. There is no adequate funding for the implementation of above mentioned laws and programmes, and no gender budgeting, and no gender analysis of development policies. But, we all women now should work hard to empower women and elect them for an upcoming parliamentary election in June this year. Women can play a major role in discussions and decisions on distribution of mining wealth, social and environmental impacts of mining, and addressing the issue of climate change. We should make all this political commitment to become in a reality.

The National Committee on Gender Equality of Mongolia together with UNDP (Country Office Mongolia and supported by the Asia-Pacific Regional Center and the Regional Bureau of the Asia Pacific) is planning to organize the Asian regional conference on Gender Equality in Ulaanbaatar, Mongolia from 3-4 April 2012. Using this opportunity, we would like to invite Baroness Verma to attend this conference.

Today’s event is not the first but not the last one for us. We are committed to building women’s leadership. This year, we are running activities to promote women’s participation in decision-making as well as developing women’s leadership skills with a strong partnership of our allies. Our next initiative is to organize the business networking between European, British and Mongolian businesswomen this May.

I am looking forward to more cooperation and partnership to empower women, enhance recognition of women's success in the society and facilitate women's networking in Europe.

Thank you very much for your attention.