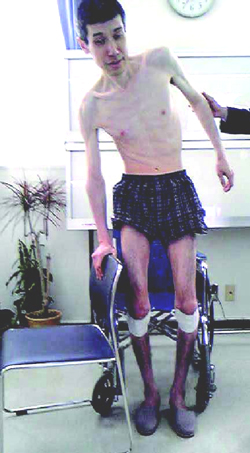 More than 1,300  members of the UC have returned to their religious communities recounting tales of kidnapping, forced confinement, beatings, food deprivation, harassment, rape and other heinous and humiliating acts in an attempt to convince or force them to renounce their faith.

Japanese police have refused to investigate cases in which adult UC members have been kidnapped, on the grounds that it is a “family matter.” Japanese prosecutors have declined to press charges for similar reasons. Japanese courts and authorities have failed to provide redress in numerous cases.

Shamefully, clergy members of various churches in Japan have condoned, advised, aided and abetted the kidnappers, and have often participated in attempts at forced conversion.

Many UC members were even confined in mental hospitals until this was ruled illegal.

Ministers and other faith-breakers often charge large fees for their illegal services.

Mr. Toru Goto, (please see photo above) head of the Japanese Victim's Association against Religious Kidnapping and Forced Conversion, was held for 12 years and 5 months from September 11, 1995 to February 11, 2008. He was detained in a prison-like room and subjected to daily pressure to renounce his faith with invective and assaults. At the end of Mr. Goto’s confinement, he was severely malnourished and had to be hospitalized for 50 days to recover.

One UC member, trying to escape from a sixth-floor apartment where he was confined, suffered severe loss of memory when he fell.

At least one woman was repeatedly raped by her "deprogrammers."

Another woman was so demoralized and desperate that she committed suicide.

Widespread cases of Post-Traumatic Stress Disorder (PTSD) have been reported among victims who returned to the Church and those who renounced their faith.

Many marriages were broken as a result of victims being required to renounce their church-sanctioned marriages. A husband and a one-year-old daughter were kidnapped and coercively converted out of the church, leaving the pregnant wife and a child being born into a broken home. She is still waiting for a chance to meet her abducted child, while raising her other child by herself.

“Freedom of religion is guaranteed to all.”

“A person who, by intimidating another through a threat to another's life, body, freedom, reputation or property or by use of assault … or hinders the other from exercising his or her rights, shall be punished by imprisonment… “

Produced by the International Coalition for Religious Freedom

For more information, visit our web site at www.religiousfreedom.com