The Universal Peace Federation (UPF) - UK held a unique and special 'Legacy of Peace' event to commemorate and celebrate the life and work of notable Ambassadors for Peace within a one day conference examining 'Forgiveness and Reconciliation'. In attendance in the Columbia Hotel, Lancaster Gate, London were people from all faith backgrounds and leaders and pioneers in interfaith. That itself spoke for the idea that no one religion has a monopoly on God or goodness and that this event was truly a collective offering and one that undoubtedly brought joy to our Creator.

Those whose lives were honoured in a moving ceremony were leading “Ambassadors for Peace” who passed away in recent years including Sheikh Dr Zaki Badawi, Prof. Ninian Smart, Mr OP Sharma MBE, Prof Anthony Flew and Mr. Maurice Geoghegan and several prominent international figures who had been close friends of the UPF and Father and Mother Moon including Pres. Abdurrahman Wahid, a former president of Indonesia, Shaykh Hassan Cissé of Senegal and Dr. Laxmi Mall Singhvi. Mr. Hédi Annabi, a Tunisian diplomat and head of the UN Stabilization Mission in Haiti, who died in the 2010 Haitian earthquake and the one hundred UN workers who died alongside Mr. Annabi were also remembered. (Photos) 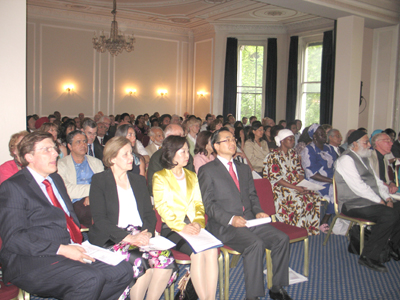 President Yong Cheol Song read an address from Rev Dr Sun Myung Moon at a similar event in Las Vegas earlier this year. Mark Brann, Secretary General of Europe UPF, explained the Unificationist belief relating to death and ascension to the spiritual world. This, he explained, is a joyful celebration of the passing from one stage of life to another.

Rev Dr Marcus Braybrooke, President of the World Congress of Faiths, commented in his talk that 'just as the Roman Catholic Church honours those saints who have passed away it is good to see Rev Moon encouraging the interfaith movement to do the same.'

Cllr. Liaquat Ali, the former Mayor of Waltham Forest and also the former Co-Chair of the Global Peace Festival-UK, added that the ceremony had been very touching. He praised Father Moon's capacity to initiate new traditions to develop the understanding of humanity as 'one family under God'. He considered promoting the legacy of self-sacrifice and public service as a wholesome tradition to develop within the UPF. Vanessa Edwards shared that she had been 'moved by the ceremony and that presenting flowers and lighting a candle for each of the honourees.' 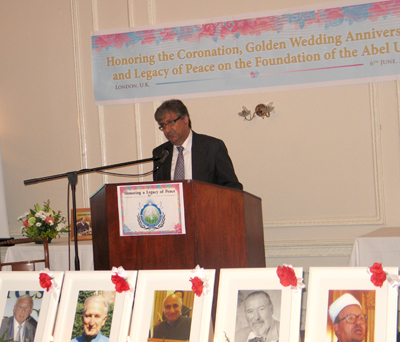 Anil Bhanot, one of the founding members of the Hindu Council UK and the son-in-law of Mr. O.P. Sharma OBE, recited a Vedic chant in honour of the departed:

Translation: 'Oh supreme lord I worship you who illuminates all the three domains of existence. The earthly, physical, the heavenly, astral and the divine, causal. For you are the creator who anoints the entire creation with your adorable divine light may that light bestow upon us the wisdom to guide out intellect in the right direction.'

Afterwards he remarked that ‘it is excellent to see past leaders being honoured. If you don’t honour such leaders then their work ceases to inspire. By honouring their works we are helping to continue their legacy.’

‘Its amazing how people of all different faiths come together’ said Nicolette Burford de Oliveira speaking about the approximately 200 people in the audience. ‘It is reassuring that such a thing is possible. I like the emphasis on the idea that peace is possible, that through serving each other for the greater good we can create a better world.’

‘Rev. Moon celebrates this tremendous occasion of his 50th wedding anniversary’ said Alan Rainer. ‘His renowned work is to create a true family on earth for the benefit of individuals and humankind collectively. Peace through co-creativity of all people around the world.’ Imam Sajid explained that 'the 50th anniversary was not a couple's exclusive special day but a celebration of their dedication to God for such a long time.' He added, 'I have witnessed their dedication with my own eyes.'

‘The whole day was inspiring’ said Imam Sajid, ‘One human family serving one God, a powerful but simple message. Peace starts within us. There can be no interfaith without faith.’ 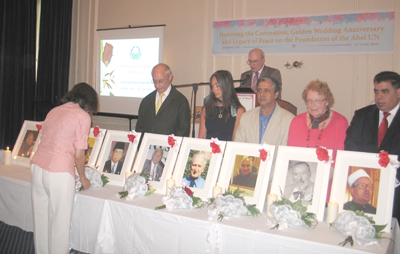 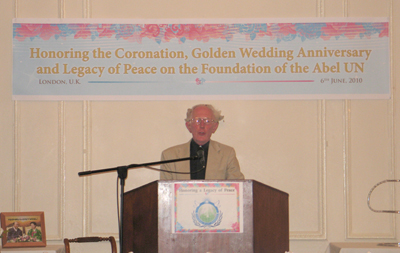