'We are the product of 14 1/2 billion years of evolution but the next 14 1/2 years will prove if we are viable as a species' stated Lawrence Bloom to add a sense of perspective to the World Environment Day 2010 commemoration event. Chair of the UN Environment Programme for Green Economy Initiative and World Economic Forum, Davos for Global Agenda Council on Urban Development, Bloom emphasied that we are suffering from a 'crisis of values' and that we had lost our sense of interconnectedness to each other and the world around us. Murad Qureshi AM commented that the competing models of economic and political theory that had inspired large sections of society in the past are now all being challenged in an unprecedented manner.  This included environmentalism based on neo-classical economics.

He commented that in his role as, now, Vice Chair of the London Assembly Environment Committee he was concerned that poor air quality in London was reducing life expectancy while noise and odor pollution were significant problems for areas of the wider city. David Fairbank explained a very practical project of building sustainable communities around waste management, energy generation and low cost housing. (Event photo link) (Video link or click on the photo) 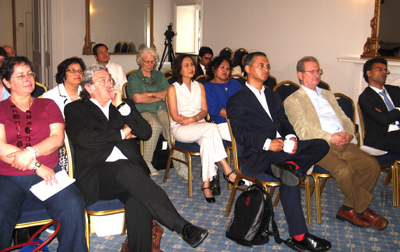 The World Environment Day stimulates awareness of the environment and  enhances political attention and public action. It has been commemorated on June 5 every year since its establishment by the United Nations General Assembly in 1972. The World Environment Day is hosted in a different city with a different theme each year. This year, Pittsburgh is the North American host city and Rwanda the host country. This year's theme is "Many Species, One Planet, One Future," reflecting the urgent need to conserve the dwindling biodiversity of life on our planet.

Robin Marsh began by quoting a section of the biography of the Founder of Universal Peace Federation regarding the interconnectedness of the environment with humanity.

'Spending time in the forest cleanses the mind. The sound of leaves rustling in the wind, the sound of the wind blowing through the reeds, the sound of frogs croaking in the ponds: All you can hear are the sounds of nature; no extraneous thoughts enter the mind. If you empty your mind and receive nature into your entire being, there is no separation between you and nature. Nature comes into you, and you become completely one with nature. In the moment that the boundary between you and nature disappears, you feel a profound sense of joy.

Then nature becomes you, and you become nature. I have always treasured such experiences in my life. Even now, I close my eyes and enter a state in which I am one with nature. Some refer to this as anātman, or “not-self,” but to me it is more than that, because nature enters and settles into the place that has been made empty. While in that state, I listen to the sounds that nature hands to me—the sounds of the pine trees, the sounds of the bugs—and we become friends. I could go to a village and know, with out meeting anyone, the disposition of the minds of the people living there. I would go into the meadow of the village and spend the night there, then listen to what the crops in the fields would tell me. I could see whether the crops were sad or happy and that would tell me the kind of people who lived there.

Even the smallest grain of sand contains the principles of the world, and even a speck of dust floating in the air contains the harmony of the universe. Everything around us was given birth through a combination of forces so complex we cannot even imagine it. These forces are closely related to each other. Nothing in the universe was conceived outside the heart of God. The movement of just one leaf holds within it the breathing of the universe. From childhood, I have had a gift of being able to resonate with the sounds of nature as I roam around the hills and meadows. Nature creates a single harmony and produces a sound that is magnificent and beautiful. No one tries to show off and no one is ignored; there is just a supreme harmony. Whenever I found myself in difficulty, nature comforted me; whenever I collapsed in despair, it raised me back up. (for more link)

Lawrence Bloom said that he came out of retirement because of a dream, that woke him up at 03:23 in the morning, of his great great grandchildren asking him what did you do to protect our environment?

He said, “We are faced with the most elegant challenge the universe could throw at humankind. Overcoming the problem of the environment relies on our understanding of our interconnectedness as a race and with the world that supports us.”

“As world leaders search for creative solutions to restore global equilibrium, the opportunity for recognising the importance of both human and environmental capital has perhaps never been so possible or achievable’’