Nakkeeran Gopal is Presented with an Ambassador for Peace Award 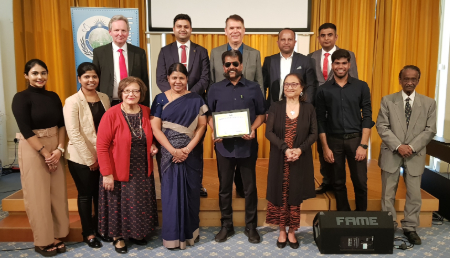 Mr. Nakkeeran Gopal was presented with a Universal Peace Federation (UPF) - UK Ambassador for Peace Award by Mrs. Rita Payne, former BBC Asian Editor and Emeritus President of the Commonwealth Journalists Association, and other UPF officials, on March 23rd in the Lancaster Gate UPF - UK Headquarters. Mrs Payne emphasised that she was representing the International Media Association for Peace when presenting this award. This is an association within Universal Peace Federation promoting media accuracy, freedom and responsibility.

Mr Nakkeeran Gopal, a renowned journalist based in southern India, has lived a courageous and eventful life. He explained some of the challenges he has had to overcome during his career so far in a speech translated by his daughter after receiving the award. Dr Abdul Basit Syed, a Trustee of UPF - UK and founder of World Humanitarian Drive, nominated Mr Gopal for this award. He explained his reasons for this nomination during his speech highlighting his righteous career and the opportunity of his visit to London.

He is a veteran journalist from Tamil Nadu, India. He is the editor and publisher of Tamil political investigative journal, Nakkheeran. He shot to national fame in the 1990s when he took interviews with Veerappan, who was surviving in the forests committing crimes on the Tamil Nadu – Karnataka border, hoodwinking the police of the two states.

The editor of Nakkheeran Rajagopal locked horns with the state government of Tamil Nadu in Supreme Court of India to receive a landmark judgement in favour of press independence on 7 October 1994. This judgement was unanimously appreciated by global media, details below.

As an act of bravery, Nakkheeran is the first ever magazine to interview and expose a portrait of South India’s forest brigand Veerappan. The editor and his team effectively acted as an emissary between Veerappan and state governments to carry out a successful mission in rescuing thespian Rajkumar that calmed down the insecure atmosphere prevailed between two states since abduction in 2000. Earlier, Gopal had been successful in also rescuing eight forest guards kidnapped by Veerappan.