Pauline Long Presented With An Ambassador for Peace Award

Pauline Long received an Ambassador for Peace award during the programme. She is an entrepreneur, philanthropist, fashion designer, motivational speaker, and music video director with over 25 awards. She is also the founder of Europe’s biggest award for black and ethnic personalities in entertainment, film, fashion, television and arts- BEFFTA. Named African woman of the year in UK and listed in Black Women in Europe Power List. She’s a TV presenter on The Pauline Long Show SKY 182. She also nominated two of the Youth Achievement Awardees, Jermain Jackman and Keith Matthews Ssewamala.

The number of people who have been supported by Pauline Long to develop their talents and empowered to raise their own goals is staggering. It is also remarkable how many serious issues about Africa are raised on The Pauline Long Show SKY 182. Thus it is not surprising that many turned out to see her receive the Ambassador for Peace award. It was also appropriate that this could occur when many young adults were being recognised for their contributions. 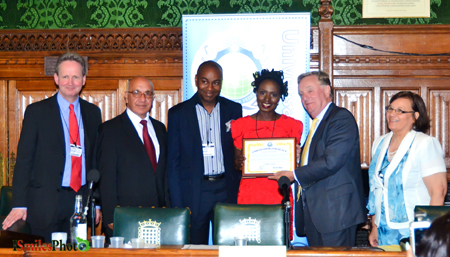 The BEFFTA Awards (Black Entertainment Film Fashion Television and Arts) were founded by Pauline Long. This is a distinctly special award ceremony honouring the best showbiz and entertainment personalities in the black and ethnic communities in the UK, USA, Africa, Caribbean, Canada and globally. BEFFTA Awards is the first of its kind rewarding under one roof outstanding achievements and contributions from Africans, Caribbeans and Asians in entertainment, film, fashion, television and arts. This international prestigious ceremony celebrates an all round accomplishments of a hard working community within entertainment and showbiz especially the unknown talent that need exposure. The awards ceremony founded by Pauline Long also aims to inspire black and ethnic personalities worldwide to achieve at the highest levels. It provides a networking platform for industry personalities.

Pauline Long was inspired to start BEFFTA awards after organising Mr and Miss East Africa UK for many years, a community project that is a voice for East African street children that she self-funded with very little resources. She however worked with so many talented people in entertainment, film, fashion television and arts who were not being celebrated despite their contributions towards the respective industries. She established BEFFTA to encourage these individuals to carry on with their industries despite challenges