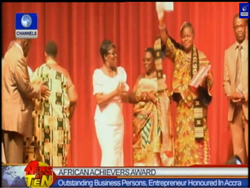 Charlotte Simon-Bongumba, Founder of Mothers of Congo, was presented with an 'African Achievers Award for Woman’s Empowerment' in a ceremony in Ghana, for her efforts for peace and justice in the Democratic Republic of Congo.

Mrs Simon-Bongumba was given the prestigious award for the 'life changing work you are doing for the women of the Democratic Republic of Congo both home and abroad in an area as critical as sexual violence. As an individual and through the work of Mother of Congo your desire and practical commitment to transforming the destinies of women who have suffered horrific crimes has become a source of inspiration, hope and empower for many.'

'Maman Charlotte' founded the Mothers of Congo to highlight both the horrors of mass rape and the genocide in the Eastern Democratic Republic of Congo (DRC). (www.mothersofcongo.org). She has called for the end to impunity for those who have committed rape or war crimes in the last 18 years in DRC.

She has supported her daughter's efforts to fund clinics in eastern DRC that deal with the victims of sexual violence. (www.tatianagiraudfoundation.org)