Lord Tarsem King of West Bromwich passed away yesterday. He was Universal Peace Federation (UPF) - UK Patron and a UPF Presiding Council Member. He was a  fatherly man who was willing to support a wide range of good causes. He believed in interfaith dialogue and activities as a way to remove misunderstandings and allow human relationships to grow that would facilitate community cohesion. Lord King spoke about this issue numerous times in the UK, in a conference in Tel Aviv, Israel or in visits to South Korea. With his help many other groups were supported to develop humanitarian platforms such as MonCher, an organisation to help Mongolian Street Children, Association for the Development of Mongolian Women in Europe and the British Chinese Accounting Association who support the Love Bridge to assist Chinese orphans. He had an innate sense of fairness and decency that informed his decisions to support the human rights of women, persecuted groups and disadvantaged minorities. He hosted the UN International Women's Day annually for several years now and commemorated Human Rights Day, Africa Day, as well as sponsoring numerous human rights conferences often with the support of the UPF - UK and the Women's Federation for World Peace - UK. He hosted several conferences that highlighted issues of violence, both domestic and sexual, against women. He commented on the unfairness of the decision not to allow women Bishops in the Anglican Church of England in a recent meeting.

He supported raising the awareness in the UK of Satguru Ram Singh Ji who, among many other accomplishments, many promoted a non-violent opposition to British rule in India before the campaigns of Mahatma Ghandhi began. He hosted a number of conferences to raise awareness of steps that precede genocide and were a prelude to the Holocaust. 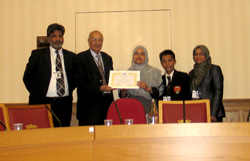 It became an annual event to highlight this issue in the House of Lords around the time of the UN Holocaust day. There were numerous human rights ssues that were raised and promoted with excellent good sense under his stewardship. Those issues included the prevention and eradication of torture, the violence caused by greed for conflict minerals in eastern Democratic Republic of Congo, the persecution of minorities or disadvantaged groups in nations such as North Korea, China and nations in the Middle East.

He was energised by the annual Youth Achievement Awards event he hosted each July. He listened intently to each young person's tesimony of their public service or meritorius work. He often said those events made him feel young again. In this way he supported the development of Youth UPF and WFWP youth activities. In the photo below he is listening to the experiences of a former child soldier who is working to raise awareness of the issue.

Lord King demonstrated a wisdom and enthusiasm for the importance of the family. He expressed this wisdom in the regular UN International Family Day events he held. He enjoyed presenting the UPF Family Award to worthy families. He and Lady King also participated in the marriage rededication and blessing event of the Universal Peace Federation and addressed other similar marriage rededication and blessing occasions.

It was in his role as a member of the Universal Peace Federation Presiding Council Member that he could express the heart of many of the close contacts and long standing supporters of Father and Mother Sun Myung Moon in the eulogy to Father Moon that he will be remembered by many worldwide Unificationists. His visit to South Korea, changing his schedule on the sudden news of Father Moon's passing, and the sincere preparation for that speech was very moving. Part of this speech is included here:

Father Moon was no stranger to suffering and conflict. He witnessed first-hand the brutality of a North Korean communist prison camp, and the horrors of the Korean War. He always stood strong against dictatorship, for the sake of freedom and democracy, and especially religious freedom. If there is no religious freedom, humanity will decline. Thus Father Moon was always leading the way in the promotion of religious freedom. Father Moon also taught us to appreciate the value of marriage and family. He, together with Mother Moon, blessed in marriage millions of couples worldwide, calling each to pledge fidelity, true love and devotion to God. By strengthening marriage and family there is hope for the future.

In the Sikh tradition, marriage and family are sacred. This is our fundamental teaching. Therefore, Sikhs around the world can understand and appreciate Father Moon’s teaching. Mother Moon, you have visited the United Kingdom's Houses of Parliament and shared the vision of Father Moon. The people of the United Kingdom are grateful for your life of service to the highest and most noble ideals.

In closing I want to say once again how honoured I am to have known Father Moon. To Mother Moon and the entire family I extend my heartfelt appreciation and encouragement as we go forward to build a world of lasting peace.'

Lord Tarsem King of West Bromich will be missed by the UPF and their friends for all the campaigns that he has supported so enthusiastically over many years as well as for the values of public service that he typified in his life.(Photo below of a presentation of the Universal Peace Federation's Ambassador for Peace award to the Ambassador of Nepal at the UPF-UK annual Peace Council on December 8th 2012.)