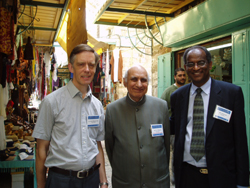 On May 11th 2010 Mr Om Parkash Sharma MBE passed away. Mr Sharma (middle in photo) was a great friend of the Universal Peace Federation and an Ambassador for Peace. His funeral was today. Hearing more about his life from his family members extended our understanding of his kindness  to a much wider realm of his life. He was able to touch so many people with his compassion and care.

Mr Sharma supported the Universal Peace Federation in a number of ways. He supported the campaign to remove an unjust ban from the UK of UPF's founder, Rev. Dr. Sun Myung Moon. He introduced us to many important figures who helped us in the campaign. He visited the Middle East on one of UPF's Middle East Peace Initiative visits. He also met Father Moon on a number of occasions. He was one of those who welcomed Father and Mother Moon into the UK in November 2005. He was also willing at very short notice to speak or offer an inspirational chant. Many friends gathered at the house to put flowers in the coffin and pay last respects. His coffin was drawn by a horse driven hearse in a procession from his house to the Crematorium. There was a moving service, attended by more than 500 people, full of testimonies of the loving care and goodness that had touched their lives. One recent story was of Mr Sharma's invitation to Buckingham Palace to meet Her Majesty the Queen representing the Hindu community. Mr Sharma, who was recovering from a stroke and in a wheelchair, was happy to be driven to the Palace for this distinguished occasion in his somewhat rusty, T-reg Nissan Primero. 'It gets me from A - B so what's the matter?' was his attitude. His son said that they were held up with a line of Mercs and Rolls Royce's behind them while security checked that they were to be let in but Mr Sharma did not seem to mind. Material things were not so important to Mr Sharma. One grandson added that he had given the grandchildren both 'roots and wings.' The roots were the values he had imparted and the love that he had given to them. The wings were the opportunities to fly high to fulfil their talents in the world.

Doves were released after the service to represent Mr Sharma's extensive peace activities. Mr Sharma had received an MBE from Her Royal Majesty the Queen and the Hind Rattan from the Indian Government. He was President of the National Council of Hindu Temples UK and a Director of the Hindu Council UK. He was a great interfaith figure being Co-Chair of the Interfaith Network, Patron of the World Conference on Religion and Peace, a Trustee of the World Congress of Faiths, UK Chapter and a Patron of the United Religions Initiative. 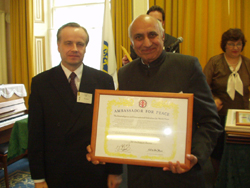 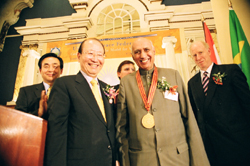