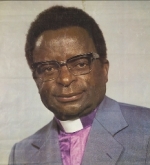 Harare, Zimbabwe - The first black prime minister of an interim white-dominated government before Zimbabwe's independence, Bishop Abel Muzorewa, died at his Harare home on April 8. He was 85.

A Methodist bishop, Muzorewa joined the government of the short-lived Zimbabwe-Rhodesia in a deal with Ian Smith, the last white prime minister, in 1978, two years ahead of the first all race elections that swept President Robert Mugabe to power and dropped the name of Rhodesia, as the former British colony was known. He was granted peace awards by both Pope John II and the United Nations in the 1970s for his efforts to liberate his country from the United Kingdom. Bishop Muzorewa was a member of UPF's Presiding Council.

A patron of a Christian organization for the blind called Arauman Mission Fellowship, Bishop Muzorewa authored two books: Rise Up and Walk and Evangelism that De-colonializes the Soul. Deeply saddened by the violence following the 2008 elections, he issued a prophetic call for his countrymen "in the name of God the creator and sustainer of human life and of freedom" to stop "the pervasive demonic culture of impunity, if Zimbabwe is to be a united, peaceful, enjoyable and prosperous nation."

He will be buried April 17 at the old Mutare Mission in Mutare.