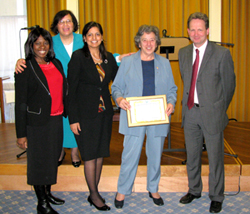 Mrs Marks, in her address, described the history and activities of the League of Jewish Women since being founded in 1943. She explained that stemming from a Judaic ethos, Jewish people believe that they should play an active part in the community wherever they live. The LJW has sought to educate young women to be both self supporting and train them to be active for the good of all society. The LJW is now affiliated to the National Council of Women as a consultative body. It is also very involved in interfaith meetings and activities. She concluded emphasising that the LJW is a largely voluntary body that is an active community promoting service to those in need. She has  2 daughters and 6 grandchildren. (For other Ambassador for Peace awards here)