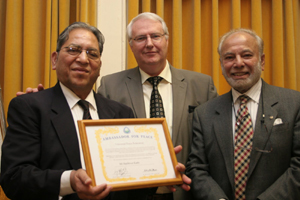 He is a founder member of the Britain Chamber of Commerce which has helped improve commerce between Nepal and UK. He is also a member to a couple of charitable organisations and is a well respected member of the community. Currently he is engaged in freelancing in linguistic and interpretation for Home Office in nepalese immigration matters. I believe that Mr Karki has served the community well with a selfless commitment to everything he does.