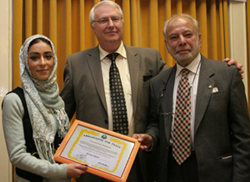 Seja also worked as an intern for Amnesty International in January 2009 on the Anti-Death Penalty programme, where she was based at the International Secretariat in London.

She has recently won an award by V-inspired the National Volunteer’s Service, for being the most inspirational volunteer for Greater London. Seja is one of the first young Muslim women to be chosen in a national advertising campaign for V-inspired, the leading volunteer charity for young people.  She ran make-up artist workshops taught by industry professionals to 16 -25 years olds interested in media or fashion through a Cosmetic Hive project she set up.

Seja has also been working alongside an Iraqi Minister of Parliament and has written social initiatives on his behalf. Her initiatives have been presented to the Iraqi Parliament for consideration. As an aspiring legal commentator she has recently had three of her articles published in the Journal of Islamic State Practices of International law.