The Mayor of Croydon, Councillor Sherwan Chowdhury and his Mayoress, Mrs Rohema Chowdhury, graced the UPF/WFWP Christmas Afternoon Tea with their presence, offering a heartfelt message of support to the community in these most challenging times. Master of Ceremonies, Dr Lance Gardiner (UPF So 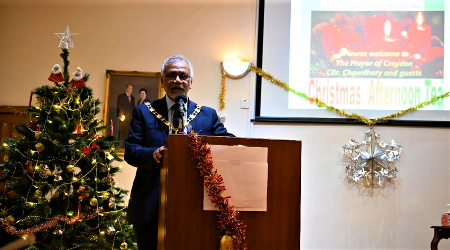 uth London branch coordinator), warmly welcomed the audience of 40 to the Peace Embassy, Haslemere Hall, in Thornton Heath, which was bedecked with Christmas decorations, and introduced the hosting organizations with informative video presentations showing highlights of the past year’s activities. In spite of the difficulties caused by the ongoing pandemic, both organizations had expanded their reach through online events accessible to large numbers of people as well as holding the Peace Road Walk along Hadrian’s Wall, which all served to awaken our hope for the unity of humankind beyond the barriers of race, national identity and religion.

Special awards were presented by The Mayor to two recipients who had demonstrated outstanding service to their communities. Janice Flint had, like many others, stepped in to fill the gap by supplying PPE to frontline workers, and was deservedly recognised with an Ambassador for Peace award, as was Winifred Nelson-Gaye, who had opened an orphanage in her home country of Liberia while serving in that country’s embassy in London. Other heroes of the pandemic who had been nominated for awards could not attend due to the prevailing situation but one of them supported the event through the provision of free reusable fabric masks to participants. 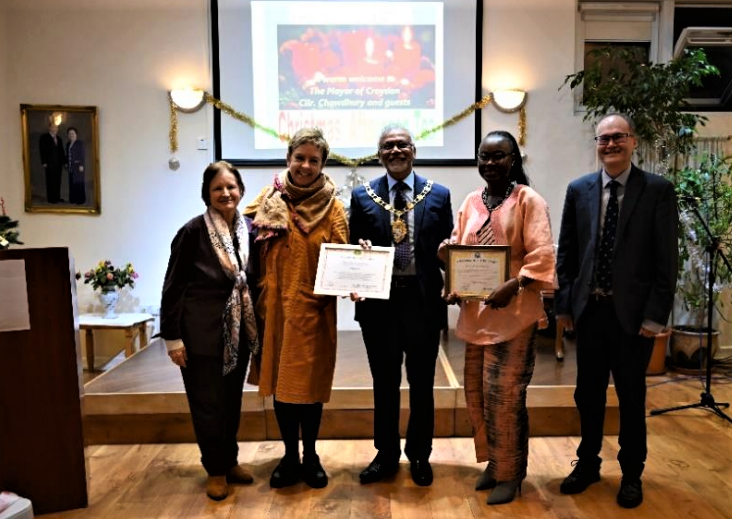 A raffle was held in aid of Destiny Junior School in Uganda, conducted by Dolores Read (WFWP South London chairperson). Ashley Crosthwaite, Director of IRFF-UK, a sister organisation to UPF and WFWP, shared slides featuring the school and spoke about how it has successfully grown through the financial support of IRFF and the hosting organisations. He explained how the school has provided access to clean sanitation, health services and education, and was able to provide meals to the children even when schools were closed due to pandemic restrictions. The proceedings got down to the serious business of celebrating Christmas with good cheer, as
festive songs were performed by Peter Graham and Dongsoon Chen, including old favourites such as “White Christmas” and “Have Yourself a Merry Little Christmas”, with the audience joining in. Nelina and Mark Kolpatchki added to the lively atmosphere with performances of Ukrainian songs in their traditional attire. The MC chimed in with a few seasonal jokes which raised laughter from the audience. After the conclusion of formal proceedings, participants enjoyed tea and snacks and fellowship together including some delightful impromptu singing from some of the participants – it was clear that after a long time of being apart everyone was so grateful to connect in person and celebrate this special time of year with each other.