Universal Peace Federation Sunhak Peace Prize: Honouring Outstanding People and Organisations. This was a programme, held on June 10th, to raise awareness of the biennial award whose aim is to highlight those who are making the world better for future generations. Mr Jacques Marion, Co-Chairman of the Universal Peace Federation for Europe and the Middle East, made a presentation explaining the vision and record of the Sunhak Peace Prize that can be seen here. 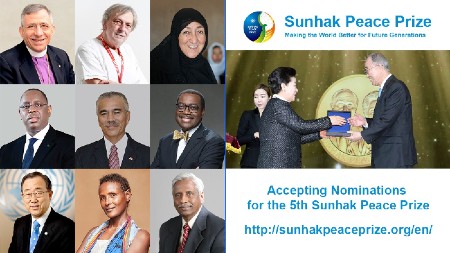 The Sunhak Peace Prize is an initiative of Dr (Mrs) Hak Ja Han Moon, one of the co-founders of the Universal Peace Federation (UPF). It is one of the projects of the International UPF to receive nominations from the Ambassador for Peace worldwide network and to select worthy individuals or organisations who are making outstanding contributions for future generations. We are looking for nominations to submit before the end of July deadline. Usually two awardees are presented with this award every other year during a February World Summit of Heads of State, former Heads of State and senior Ministers of State, Parliamentarians, Academicians and Religious Leaders. There is a sum of $500,000 given to each awardee as well.

The categories for nomination are A. Sustainable Human Development B. Conflict Resolution C. Ecological Conservation. If you have someone or an organisation you would like to nominate please contact us on before the deadline at the end of July.

In February 2020, the Laureates were H.E. Ban Ki-moon, 8th Secretary-General of the United Nations, the current President of Senegal, H.E. Macky Sall and the former Chair of the Lutheran World Federation, Bishop Dr. Munib A. Younan.

Past awardees have included HE Anote Tong, President of Kiribati (2003 to 2016), who improved global awareness of the severity of climate change and sought for action by the international 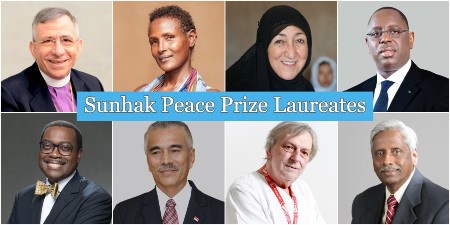 community for its solution, Dr. Modadugu Vijay Gupta, an Indian biologist and fisheries scientist who pioneered the blue revolution and has invested his entire life to developing aquaculture as an alternative solution to the future food crisis, Gino Strada, the founder of Emergency medical relief in the Middle East and Africa for refugees' “right to be cured.” and contributed to spreading culture of peace through anti-war movement, Sakena Yacoobi, the founder and Executive Director of the Afghan Institute of Learning who presented a fundamental solution to refugee resettlement through 'education', and contributing to the improvement of human rights and status of Muslim women, Waris Dirie, a super model who became a human rights activist to eradicate FGM and Akinwumi "Akin" Adesina, the President of the African Development Bank, who is spearheading good governance of Africa through agricultural innovation and the eradication of poverty.