Last night was an introduction to Universal Peace Federation (UPF) meeting at the London UPF HQ. After explaining UPF international activities by video and the UK activities by powerpoint we could share some of the underlying peace principles that guide UPF's vision of one family of humanity under a loving God. One person shared after that she felt this is where she was supposed to be. She had found a home of people of similar ideals.

Rev. Dr. David Hart, a retired Anglican Priest, commented during an address commemorating the second Anniversary of Father Moon's passing, that to him, Sun Myung Moon was like Jesus calling humankind to realign their faith to deal with current challenges informed by personal inner experience of the living God.

Keith Bennett on the Relationship of Father Moon and North Korea

Keith Bennett has tried to understand the relationship of Father Moon with North Korea. He has visited North Korea regularly since 1983. He has many friends there. He loves the Korean people and thinks they are blessed with the finest qualities of human nature. He feels the Korean peninsula is unsurpassed in its physical beauty.

"As a regular visitor to North Korea I have been able to see with my own eyes something of the surface of this work. Things like the Potokang hotel that was renovated by Rev Moon and maintained by the Unification Movement. The Peace and Convention Centre in front of the Potokang Hotel.  The Billboards of the Peace Motors is the only non-political advertising in all of North Korea."

Two verses of Prophet Mohammed (PBUH) ‘Whoever removes the obstacle from the path does an act of charity.’ 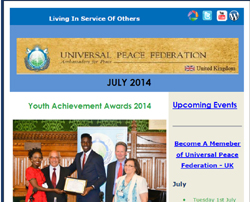 African Woman of the Year 2012 and UPF Ambassador for Peace

2nd Anniversary of the Ascension of Father Sun Myung Moon

Founder of the Universal Peace Federation