"Women in Leadership: Achieving an Equal Future in a COVID-19 World.”​ 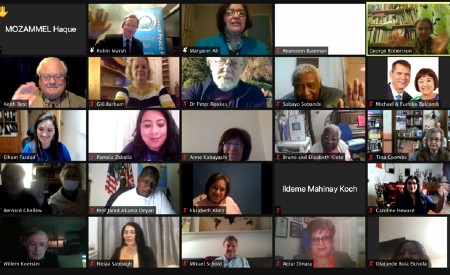 I feel very honoured to have been part of the yearly events hosted by the Universal Peace Federation (UPF) for the past four years marking International Women’s Day. Although we have not met in person at the House of Lords for the last 2 years, the online event held on Thursday 11th March and hosted by Margaret Ali, UPF UK Director and Robin Marsh, Secretary General was of the usual highest vibration and enlightenment.

The evening was further enhanced by the giving and receiving of UPF Ambassadors for Peace Awards in recognition for “those that live for the sake of others” and with the encouragement to “do more”. I include a few snapshots here.

If you know Margaret, she has the ability to attract and persuade the most amazing speakers to the UPF events and this one was no exception. As a campaigner for the elimination of violence and abuse in the home, it was of course heartening but also sadly predictable that most of the speakers made reference to the worst effects on vulnerable women, children and men at the hands of their abusers in light of the current extended lockdowns. However, the universal themes also included collaboration, empowerment, support, love and connection and gender parity.

Three years ago, I delivered a speech at the House of Lords in which I referred to the dawning of the Age of Aquarius and the time of the Divine Feminine. Not sure those words have been uttered in that space before!! So it was a wonderful moment to hear Dr Michael Balcomb, Chair of the Family Federation, and Carole Stone, UPF Patron encourage religious leaders and men and women in all walks of life to create better balance between our masculine and feminine sides and to be our “sister’s keepers” as we come out of the current restrictions.

It is without doubt that there is an increase in mental health issues from the experiences all have endured globally. It was a lightbulb moment for me when Pamela Zaballa of the NO MORE campaign, gave us some statistics from a recent survey conducted by her charity. This did indeed highlight the rise in violence in the home, the increase in demand for support, the decrease in funding this year and for next year but also the rise in reports from staff and volunteers of the decline in their own mental health. This is an issue I had not really considered so much. However, the positive outcome for the project is that board members stepped up to help out and Pamela commented that men have to be part of the solution.

This theme was echoed by Shaun Bailey, MP for West Bromwich West, who has launched a 50/50 cross party campaign to level the numbers of women in parliament. Leading by example, Shaun employs women as his senior team leaders and 70% of his staff are women. UPF’s very own Keith Best remarked that he too thought that women make far better MPs. 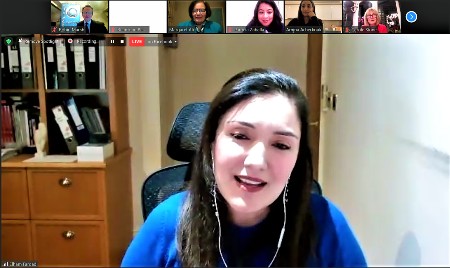 Equality was a hot topic, and I was inspired to hear of the charity set up by Elham Fardad who has used her own journey of rising from an 18 year old migrant with no money and no hope, to a respected and professional woman leader working for one of the major accountancy firms in the UK. Her charity, Migrant Leaders has an army of 600 senior mentors who provide incredible support and advice to young people, some as young as 16, with the combined and ultimate goal of improving female representation and ethnic diversity in the board room. She is not alone!! 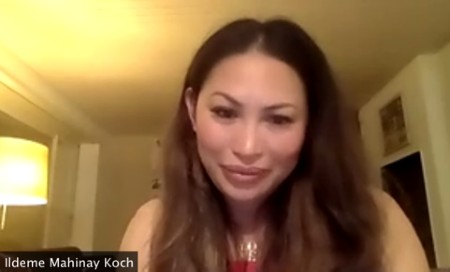 Ildeme Malinary Kock also received an award. Ildeme is the founder of the Conscious Beauty Brand and lives and works in the Philippines. She inspires women towards self-care, self-belief and self-confidence, believing that “confidence comes from courage and from courage comes change”. I loved her energy and grace.

This was echoed with passion and commitment from Professor Jared Akama Onjari of Kenya, who encouraged us to use our voices to help women gain better equality stating that “the future should be one in which we leave no-one behind”. 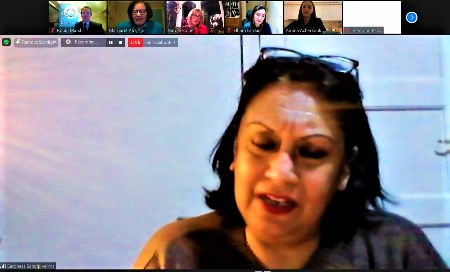 We also had the privilege of being joined by a ever constant supporter of UPF, Baroness Sandip Verma, who summed up the themes of the event with the hashtag #choosetochallenge. She encouraged us all to challenge ourselves, our governments, our institutions, our friends and colleagues and to offer support for those grieving, those with mental health issues and victims of abuse. As a true leader, Baroness Verma asked us all to consider “how can we lengthen the ladder for others?” (See Video Here)

I am so grateful for such a great evening with my UPF family. I know that all other participants on the call were fully engaged and excited by the speakers and are in full support of the values and commitment of the UK UPF team.

Let us hope that next year we will be able to meet and hug each other as we strive to make our world a better place for all.

Ambassador for Peace awards were also presented to:

A challenged world is an alert world. Individually, we're all responsible for our own thoughts and  actions All

seek out and celebrate women's achievements. We can certainly ALL  choose to end violence against women & say NO MORE.

Collectively, we can all help create an inclusive world. From challenge comes change, so let's all choose to challenge.

Gender equality is essential for economies, organisations and communities to thrive. McKinsey's 'Women Matter' landmark report back in 2007 demonstrated the correlation of the presence of women at board and top-management level and organisational and financial performance. A gender equal world would be healthier, wealthier and more harmonious.

Each of us can contribute by actively challenging stereotypes, fight bias, broaden perceptions and celebrate women's achievements.

Now, more than ever, there's a strong call-to-action. A strong call to #Choose to Challenge - a strong call to motivate and unite friends, colleagues and whole communities to think, act and be gender inclusive and challenge all that is unjust in gender parity. Just consider women’s  achievements in politics that we celebrate,  but in fact there are only 20 countries, currently that have a woman head of state. In our country UK, there were only two women prime ministers in all our political history! We feel quite advanced in the western world but as statistics shows there are far too many women being abused daily!!  Imagine a world of equality and acceptance. On which  many people have been working hard! For so long – yet every day we hear a female TV presenter or board member or any other profession, earns less than their male counterparts for doing exactly the same job!! All this must be challenged. The greatest achievements, accomplishments,  amongst others all began with the start of an idea. It was the dedication and free will of the individual and/or groups to spread their ideas that make it into reality. They made it happen, so collectively we can all challenge and play a part in bringing the change required.

UPF honours International Women’s Day by holding an annual event to address the inclusion and equality of women in the modern world. UPF is led by a woman, Dr Hak Ja Han Moon.

Topics that have been covered in the past include increasing the number of women in the boardroom, highlighting women’s political and economic participation and a discussion of UN Resolution 1325 mandating equal numbers of men and women in peace-making activities. This is the opportunity to come together as a community to celebrate, honour and take action. Violence against women at home or at work has been a topic we highlighted during covid.

We look forward to seeing you on March 11th.