Inspirations from the World Summit

The Summit was held in Kintex, outside Seoul, in South Korea. More than 2,000 national and 5,000 regional representatives of governments, parliaments, religions, media, academia, the private sector and civil society, representing 171 nations, discussed how to be better custodians of our world and advocates for peaceful solutions to the many problems we face together. See the videos of speakers below by clicking the links.

Dr Michael Balcomb, Europe and Middle East UPF Chairman, sharing his experiences of the World Summit 2020 that was the most prestigious event ever held by the Universal Peace Federation and the conclusion of the last seven years effort.

Rev Dr David and Kyunja Hanna: Sharing their inspirations of the World Summit that almost did not happen because of the Corona Virus pandemic. 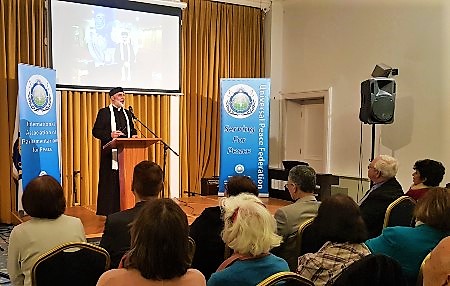 The UPF World Peace Summit 2020 near Seoul, South Korea was a great success. There were 7000 participants from 171 nations attending a wide variety of events including current and former Heads of State, politicians, religious leaders, academicians, and youth. The wide ranging programme featured the centenary of UPF Co-Founder Father Moon, the announcement of the Sunhak Peace Prize and the Marriage Blessing for 6000 couples.

In his opening plenary, former UN Secretary-General Ban Ki Moon commended UPF for its many inclusive programs and activities that bring together people of diverse backgrounds and faiths and encourages peaceful resolutions to the world's complex challenges.

Newt Gingrich, former U.S. Speaker of the House, acknowledged the uniqueness of the occasion. "It is a reminder of how connected we all are. We are all bound together out of a common concern. The recent coronavirus outbreak and the wildfires in Australia are a reminder of why we need a movement of people working together in a peaceful way."

To learn more about of the vision of the Universal Peace Federation please see www.upf.org.

The Universal Peace Federation (UPF) has come a long way since 2005. The inaugural global tour by the co-founders, Father and Mother Moon, established a momentum that has continued through the years. Along the way UPF received a General Consultative Status with the Economic and Social Council of the United Nations only shared by 140 other global NGOs. UPF – UK has received charitable status approximately one year ago.

This year is also Father Moon's centenary. There have been several major events such as the World Summit in February 2020 to highlight this centenary year and to further explain his vision for building an extensive culture of peace. Father Moon's inaugural UPF speeches were rooted in this vision of a world that recognises its interdependence, seeks to build mutual prosperity based on universal shared values aligned with God who loves us all equally, as one family of humanity. The website www.thelegacyoflove.org provides more information about the centenary anniversary.